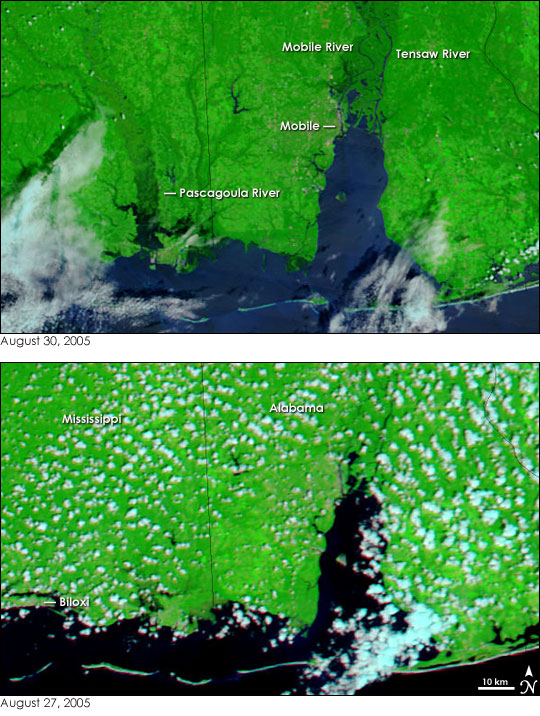 Hurricane Katrina sent water barreling into Mississippi and Alabama when it moved ashore on August 29, 2005. The powerful storm surge combined with heavy rains to cause widespread flooding along the Gulf Coast. The top image, acquired by the Moderate Resolution Imaging Spectroradiometer (MODIS) on NASA’s Terra satellite on August 30, 2005, shows flooding in all of the rivers flowing into the Gulf. In these false-color images, water is black and dark blue, vegetation is green, and clouds are pale blue and white. The flooded rivers make the land along their banks dark green.

The most severe flooding is at the mouth of the Pascagoula River in Mississippi, where the river mouth now resembles a wide bay. The river itself was too small to be visible against an even field of green on August 27, lower image. Three days later, it cut a wide track across the top of the “bay.” Flooding is also evident along the Mobile and Tensaw Rivers, which flow into Mobile Bay from the north. According to news reports, the region’s most devastating flooding occurred in Biloxi, Mississippi. Unfortunately, a cloud sits over the coastal city, blocking it from view.

The large images provide a broader view of the Gulf Coast. The images show severe flooding in New Orleans and other regions around Lake Pontchartrain at MODIS’ maximum resolution of 250 meters per pixel. Both the August 30 and August 27 images are available in additional resolutions from the MODIS Rapid Response Team.