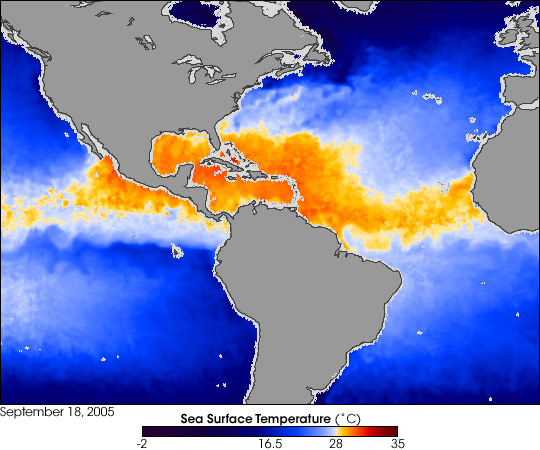 In this image, blue indicates cool ocean temperatures while orange indicates warmer waters capable of fueling hurricanes. The area in the Atlantic Ocean affected by Hurricane Ophelia looks like a big blue finger of cooler water pointing toward the Carolinas. When hurricanes evaporate the warm surface waters, cooler water from deeper in the ocean rises up to replace it.

Warm ocean water forms the engine that drives a hurricane, and the engine may get its start as far away as Africa. Originating as a “seed storm,” an atmospheric disturbance called an easterly wave travels from the west coast of Africa over the warm tropical waters of the Atlantic, picking up steam as it moves. Some tropical storms, like Ophelia, pull cool water up from the ocean depths to replace the warm water evaporating into the storm. As long as storms keep moving, they continue to derive energy from the warm waters on the ocean’s surface. Hurricanes that follow in their wake, however, don’t enjoy the same energy supply because earlier storms have brought cool Atlantic waters to the surface.

When a storm tracks into the Gulf of Mexico, however, the situation is different. Although the Atlantic has cool water beneath the surface waters, the shallower Gulf does not; its entire water column is warm. Katrina did leave a cool-water trace near the Florida coast, but that trace has since been swallowed up by the Gulf’s warm waters. The widespread orange colors across the Gulf indicate the temperature has reached the hurricane-temperature threshold of about 28 degrees Celsius; the Gulf is once again capable of brewing a strong tropical storm.

Image by Jesse Allen, Earth Observatory, based on data gathered by the Advanced Microwave Scanning Radiometer-EOS (AMSR-E) on NASA’s Aqua satellite on September 18, 2005. AMSR-E was provided to the Aqua program by the Japanese Aerospace Exploration Agency (JAXA). The Earth Observatory thanks David Adamec for image interpretation.