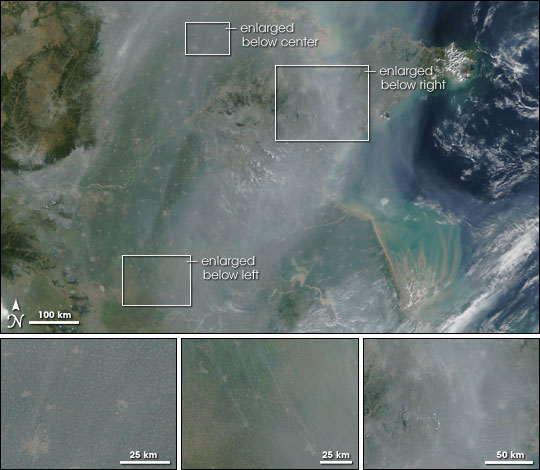 A huge, thick cloud of haze hung over eastern China in early September 2005. The Moderate Resolution Imaging Spectroradiometer (MODIS) flying onboard the Terra satellite captured this image on September 10, 2005. In this image, haze covers China from the Bo Hai Bay coastline in the east to the mountains in the west.

China’s industrialization and urban growth contribute to the region’s air quality problems. A megacity is an urban center with 10 million or more inhabitants. Two of Earth’s twenty most populous cities—Shanghai with 12.8 million inhabitants, and Beijing with 10.8 million inhabitants—are in eastern China. In addition to these megacities, smaller urban areas dot the coastal plain, appearing in this image as little beige splotches amid the green, agricultural landscape. Several of these smaller cities appear in the second row of the image. Beneath the widespread veil of haze, individual plumes rise distinctly from many of these smaller cities and towns.

According to an article in the journal Nature in June 2005, China is the world’s leading producer and consumer of coal. Coal is China’s primary source of energy, and the primary source of its air quality problems. Although China is developing and modernizing rapidly in many areas of its economy, energy production still depends mostly on inefficient, outdated technology.

When it comes to regional air pollution, physical geography and weather patterns often make the problem worse. The mountains to the west are a physical barricade that prevents pollution from dispersing westward. Weather patterns also play a role. When air is cooler near the ground and warmer higher up in the atmosphere, the hazy air is less able to rise away from the surface.

This true-color image shows a blue-gray veil of haze blowing eastward off the coast of eastern China and over the Ocean.