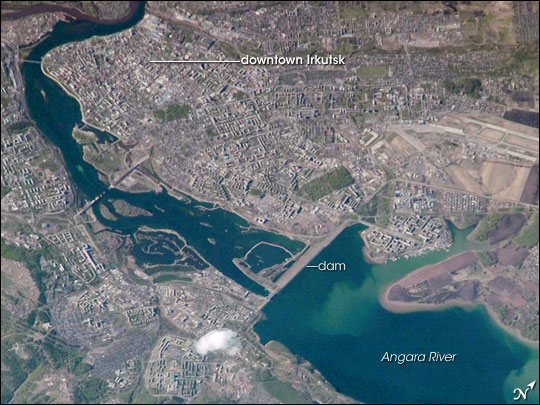 Located about 55 kilometers (34 miles) to the northwest of Lake Baikal, Irkutsk is also the chief city of Irkutsk Oblast (province) in Siberia. The city is located on the Angara River and was originally a tax collection outpost for local fur trappers. Irkutsk formally became a town in 1686. Following a revolt against Tsar Nicholas I in 1825, the city became a center for revolutionaries exiled to Siberia. The relocation of many artists, Imperial army officers, and nobles was an important factor in the establishment of the cultural and architectural character of the city. Following the Bolshevik Revolution of 1917, Irkutsk was the site of many battles during the civil war between the White and Red armies. Today Irkutsk is a major economic, academic, and cultural center in Siberia.

This astronaut photograph shows the central downtown area of the city, as well as the Akademgorodok district around the State University (left of image along the southern bank of the Angara River). The oblique (non-vertical) perspective of this photograph imparts a three dimension perspective to the scene, with shadows accentuating the blockiness of Soviet-era building projects to the east of the downtown area. The Irkutsk Dam (image center), built for hydroelectric power, dramatically widened the river and drowned several stream outlet channels along the north and south banks. The Angara River is the only outlet from Lake Baikal to the southeast, and impoundment of water behind the dam has raised the Lake Baikal water level by over 1 meter (3 feet).

Astronaut photograph ISS011-E-9913 was acquired May 24, 2005, with a Kodak 760C digital camera with an 800 mm lens, and is provided by the ISS Crew Earth Observations experiment and the Image Science & Analysis Group, Johnson Space Center. The International Space Station Program supports the laboratory to help astronauts take pictures of Earth that will be of the greatest value to scientists and the public, and to make those images freely available on the Internet. Additional images taken by astronauts and cosmonauts can be viewed at the NASA/JSC Gateway to Astronaut Photography of Earth.