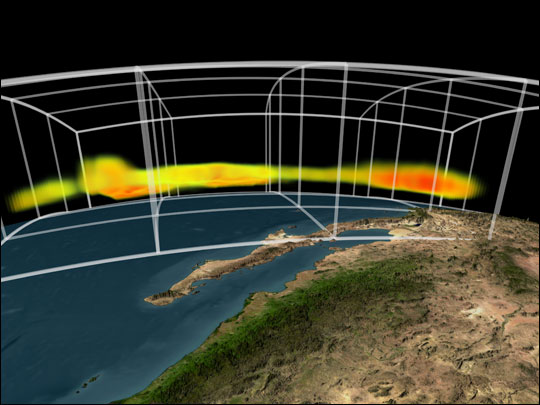 NASA’s Atmospheric Infrared Sounder instrument is able to peel back cloud cover to reveal 3-D structure of a storm’s water vapor content, information that scientists can use to improve weather forecast models. In this animation, the initial images in the series are visible-light images (photo-like) of a cloud front (leading edge of a bank of clouds) moving toward the West Coast of the United States as a low pressure area moves into the Pacific Northwest. The “Pineapple Express,” the name meteorologists have given to a stream of moisture that originates in the tropics south of Hawaii and usually crosses Mexico to enter New Mexico and Texas, has shifted westward and is also visible moving into Baja California. The air preceding the front appears to be relatively clear in the visible images.

The animation then shifts from visible to infrared wavelengths of light, which are better for highlighting water vapor. Now we see that both cloudy areas contain heavy burdens of moisture. The area that appeared clear in the visible images actually contains water vapor near the coastline as well. The viewpoint of the animation then rotates so that we can see the vertical cross section of the fronts. The variability of the vertical extent of water vapor and the amount is now clearly visible. The storm moving in from the Gulf of Alaska is more heavily laden with water vapor than the front that is moving in from the Southwest. The moisture is concentrated in the lower atmosphere.