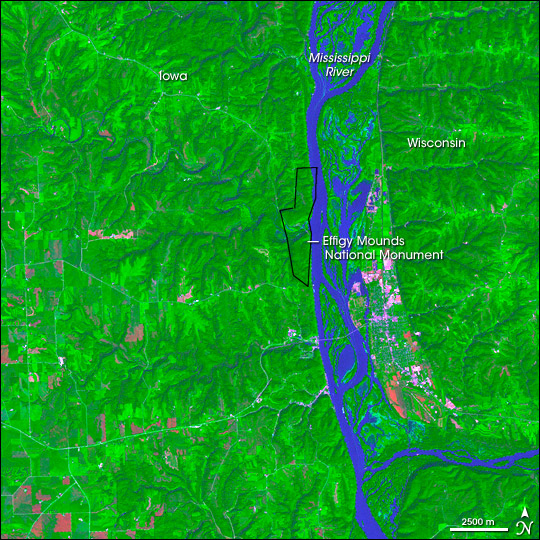 Effigy Mounds National Monument was created by President Harry Truman in October 1949 to protect a small area along the banks of the Mississippi River where Native Americans had been building earthen mounds for millennia. The 1,000-hectare (2,500-acre) area encompasses nearly 200 mounds. Mounds have been discovered at sites from the U.S. Midwest to the Atlantic Coast, but this particular site in Iowa is unusual because about 30 of the mounds are not shaped simply in lines or circles, but are instead effigies—simple shapes of mammals, birds, and reptiles.

When the American prairies were plowed under by European settlers for agriculture, many mound sites were lost. Effigy Mounds National Monument is the largest known collection of mounds in the United States. The mounds themselves are not large enough to show up in this Landsat satellite image of the area. However, the image reveals some of the interesting geographical features of the region that help explain why human cultures have occupied this part of the country for so long. Historically, most of the U.S. Great Plains to the west of the Mississippi River was covered in grasslands, which are very prone to fires that keep trees from becoming established. Here in extreme northeastern Iowa, the Effigy Mounds area was a point of transition between the eastern hardwood forests and the central prairies. Native American and early settlers would have been able to draw on natural resources available in forests, wetlands, and prairies, making the site hospitable for humans for many centuries.

The great diversity of the ecosystems in the area is amplified by the existence of numerous microclimates caused by the great variety of geologic and topographic features of the region. The plains surrounding the Mississippi River here are intricately and often deeply carved by rivers and streams, which create steep, rugged bluffs and sheltered valleys. The humidity, temperature, and wind can vary a great deal from the top to the bottom of a bluff or from the “front” slope of a ridge and the “back.“ Different plant and animal communities have evolved to exploit the different microclimate niches. The numerous rivers and streams trace blue lines across the green vegetation in this image, while dark green (often forests) vegetation mingles with lighter green (often farmland). The pinkish areas are bare ground, for example, fallow or newly cleared fields. Roads appear as light blue-gray lines.

This image was acquired by the Enhanced Thematic Mapper Plus (ETM+) instrument on the Landsat 7 satellite on September 25, 2001. It combines shortwave infrared, near infrared, and green wavelengths (ETM+ bands 7, 4, & 2) to create a simulated natural-color image, and then has been pan-sharpened to create a 15-meter resolution image. Landsat 7 was launched in March 1999 and is a joint program between the United States Geological Survery (USGS) and NASA.

The park was created in October 1949 to protect a small area along the banks of the Mississippi River where Native Americans built earthen mounds for millennia. 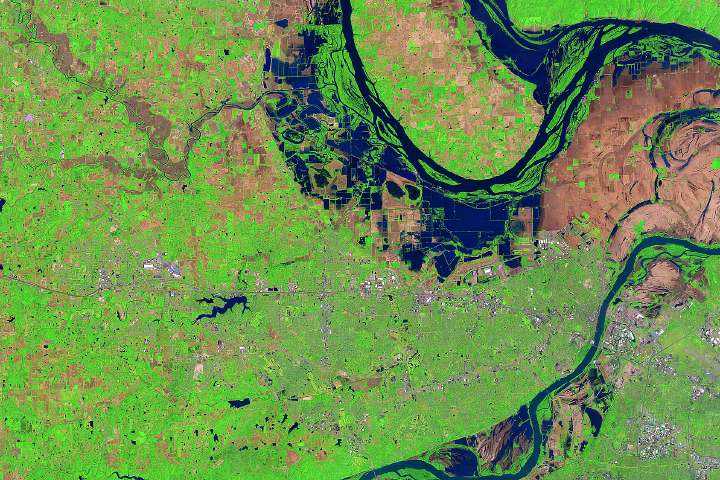