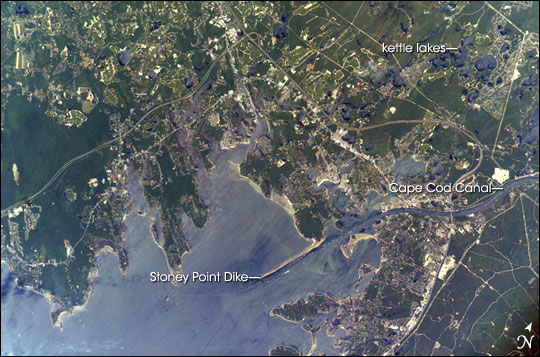 The latter portion of the Pleistocene Epoch in New England saw the creation of Buzzards Bay through the interplay of glacial and oceanic processes. Beginning approximately 50,000-70,000 years ago, the edges of the continental ice sheet covering much of northern North America began to fluctuate, leaving linear masses of gravel, sand, and silt (known as moraines) to mark former extents of the ice. One such moraine forms most of the eastern shoreline of Buzzards Bay visible in this astronaut photograph.

In addition to the moraines, the melting ice sheet produced extensive plains of outwash composed of mixed sediments and ice that bordered the bay to the northwest and west. Melting ice blocks in the outwash deposits formed distinctive circular features called kettle lakes (or holes). Numerous examples of kettle lakes are visible to the northwest of the Cape Cod Canal. Finally, waters released from the melting ice sheet raised sea level by 60-120 meters (198-396 feet) and drowned preexisting outwash channels (visible as linear embayments along the western shoreline). Buzzards Bay attained its broad current configuration approximately 15,000 years ago; the current sea level was present approximately 3,500 years ago.

The modern Buzzards Bay is approximately 45 kilometers (28 miles) long by 12 kilometers (8 miles) wide and is a popular destination for fishing, boating, and tourism. The Cape Cod Canal allows for passage between Buzzards Bay and Cape Cod Bay to the northeast (not visible); the wakes of numerous pleasure craft appear along the length of the Canal. The combination of shallow depth, tidal action and surface waves promotes mixing of the estuarine waters leading to a productive aquatic ecosystem. The dynamic nature of the Bay’s waters are visible in this astronaut photograph as surface wave reflectance patterns around Stoney Point Dike and in the kettle lakes. Like many estuaries, however, increasing development and land-use change by the surrounding communities are accompanied by nutrient runoff leading to eutrophication (an increase in nutrient levels leading to oxygen depletion) in the smaller embayments. Decreases in eelgrass, scallops, and herring have also been noted, but direct cause-and-effect relationships are not clear. Coordinated management efforts in Buzzards Bay have helped to decrease shellfish closures, conserve habitat for sea birds, and preserve open space.

Astronaut photograph ISS011-E-10856 was acquired July 22, 2005, with a Kodak 760C digital camera with a 400 mm lens, and is provided by the ISS Crew Earth Observations experiment and the Image Science & Analysis Group, Johnson Space Center. The International Space Station Program supports the laboratory to help astronauts take pictures of Earth that will be of the greatest value to scientists and the public, and to make those images freely available on the Internet. Additional images taken by astronauts and cosmonauts can be viewed at the NASA/JSC Gateway to Astronaut Photography of Earth.