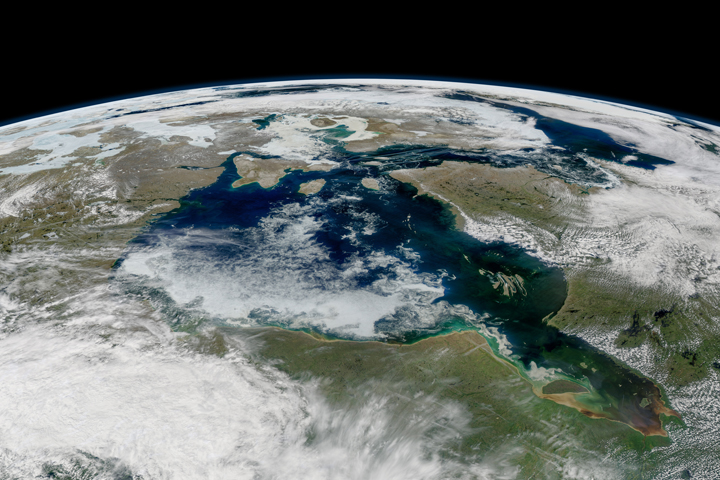 Roughly 20,000 years ago, during the peak of the last Ice Age, the area that is now Hudson Bay sat beneath a layer of ice thousands of feet thick. As the climate warmed, the Laurentide Ice Sheet thinned and glacial lakes in Canada’s interior merged with the Arctic Ocean to form the large inland bay. It is now a haven for polar bears, whales, orcas, walruses, seals, and other wildlife.

Shallow and surrounded by land, Hudson Bay freezes over completely in the winter but thaws for periods in the summer. Usually all of the sea ice is gone by August, and the bay begins to freeze over in October or November. In between, as the sea ice is breaking up, winds and currents cause flotillas of pack ice to cluster in certain parts of the bay.

That is what was happening on June 29, 2017, when the Moderate Resolution Imaging Spectroradiometer (MODIS) on NASA’s Aqua satellite acquired this image. (It is a mosaic, composed from multiple satellite passes over the region.) Note how much of the sea ice is drifting along the western coastline.

One of the most noticeable features in the image is the Belcher Islands, a curved set of islands in the southeastern part of the bay that is rich with hunting and fishing grounds for the Inuit communities who live on them. We can also see the D-shaped Akimiski Island, which is to the south in James Bay. The island has no permanent human residents, but it is the site of a sanctuary for hundreds of thousands of migratory birds each year.

The rhythms of sea ice play a central role in the lives of the animals of Hudson Bay, particularly polar bears. When the bay is topped with ice, polar bears head out to hunt for seals and other prey. When the ice melts in the summer, the bears swim to shore, where they fast until sea ice returns.

University of Alberta scientist Andrew Derocher is part of a group that monitors Hudson Bay polar bear populations with information gleaned from tagged bears and GPS satellites. Via email, he offered an update on sea ice conditions and polar bear populations in late June, around the time that this image was acquired.

“The sea ice melt was well advanced by June 29, but polar bears were still hunting along the remnant ice lingering along the western part of the bay. Bears farther south and in James Bay were already moving to land,” he said. “The break-up this spring was a bit unusual, and the bears in western Hudson Bay responded by remaining offshore longer than normal. We typically expect the bears to come ashore about three weeks after the Bay reaches 50 percent ice cover, but the bears we were tracking found patches of ice that worked for them.”

Ice conditions are closely watched by researchers who study polar bears. Most experts think that the retreat in Arctic sea ice cover in recent decades puts these bear populations at risk. While populations have been stable in the northern part of the Hudson Bay, bears in the western part have seen populations decline by 30 percent over the past decade. “Sea ice loss is simply habitat loss for polar bears,” said Derocher. “Once the ice-free period is too long, then an area can no longer support a viable population of polar bears.”