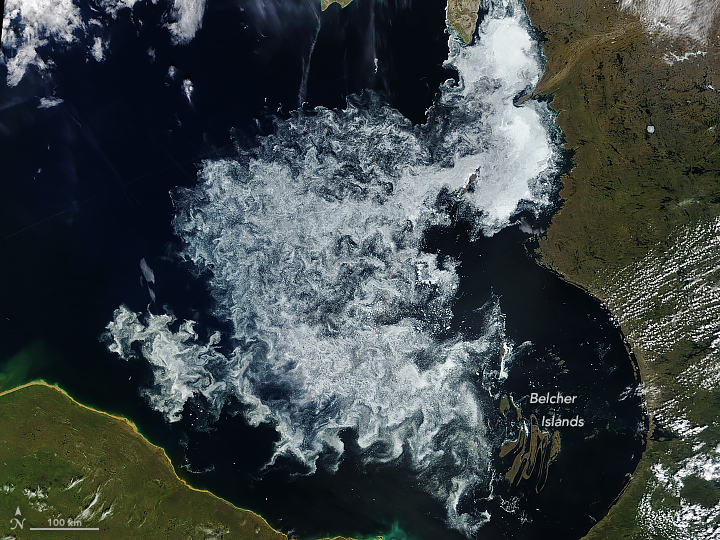 The Moderate Resolution Imaging Spectroradiometer (MODIS) on NASA’s Terra satellite captured this natural-color image of ice breaking up on Hudson Bay on July 22, 2018. The image shows a large patch of ice swirling in the southern part of the bay near the Belcher Islands, the curved set of islands in the lower right of the image.

According to the Canadian Ice Service, ice melt was a few weeks later than normal in northeastern Hudson Bay and along the Labrador Coast, but a few weeks ahead of normal in western and southwestern Hudson Bay. Though the timing of the ice breakup is changing, the bay is usually ice-free by August.

The rhythms of sea ice play a central role in the lives of the animals of Hudson Bay, particularly polar bears. When the bay is topped with ice, polar bears head out to hunt for seals and other prey. When the ice melts in the summer, the bears swim to shore, where they fast until sea ice returns.

University of Alberta scientist Andrew Derocher is part of a group that monitors Hudson Bay polar bear populations using information gathered from tagged bears and GPS satellites. In a tweet dated July 20, 2018, he noted that some of the tagged bears were still on the ice floes, while others had made the move to shore.