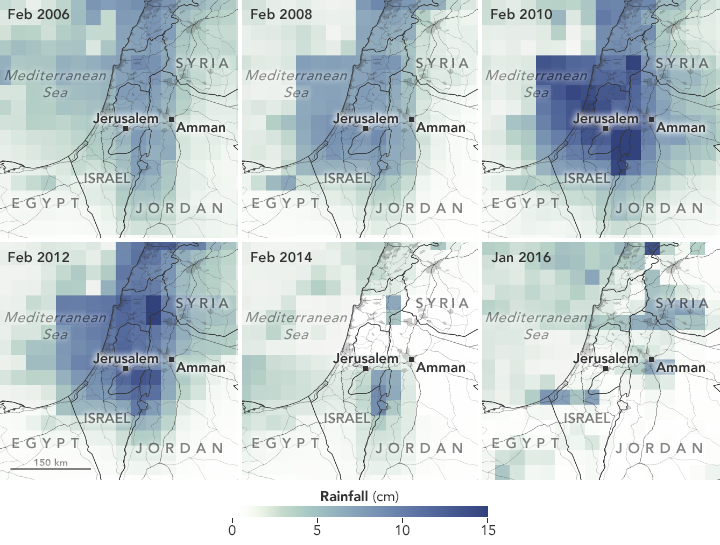 On any given day, Zoubaida Salman instructs a classroom of 15-year-olds at the Sur Baher Girls School in East Jerusalem, where she has served as the science teacher and Environment and Health Coordinator for the past 22 years. One of the most important lessons comes from their backyard: water is scarce and precious in this region.

Water shortages can lead to major sanitation issues at schools, so students have to play an active role in managing it. At Sur Baher, the most significant use of water is for flushing toilets, which stop working if there is not enough water. If the water runs out, school administrators must buy it from the city. In other regions, the schools even close because of water shortages.

A team of scientists with the NASA DEVELOP program is helping address these water shortages by collaborating with a nonprofit called Water Resources Action Project (WRAP). WRAP designs and constructs rainwater harvesting systems for schools in the Middle East to capture rainfall during the five-month rainy season for use later. Selecting a geographically promising area is time-consuming and tedious work though for the small, volunteer-based team. The NASA DEVELOP team is using satellite data to help WRAP more easily identify suitable locations for the rainwater harvesting systems.

The NASA-developed tool helps locate potential areas by looking at the region’s historical satellite data of precipitation, groundwater availability, land elevation, and evapotranspiration (the amount of water evaporating from the leaves of plants and from the land surface). 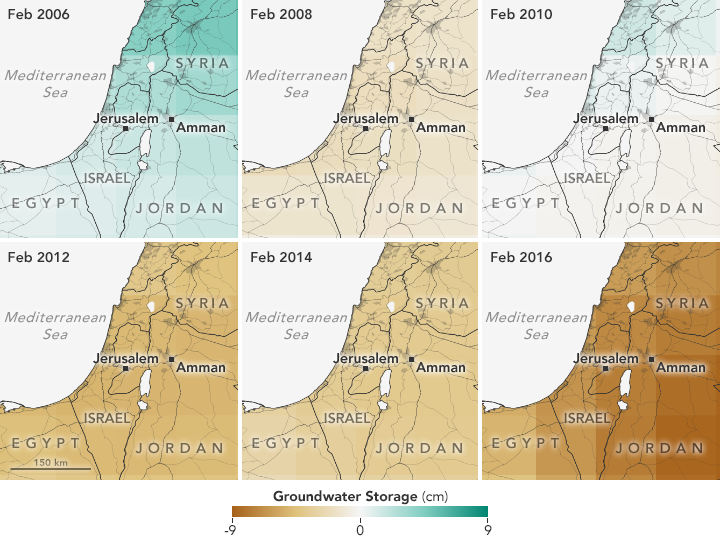 The maps show some of the satellite data used to determine suitable locations. The first image shows precipitation from 2006 to 2016, which has remained fairly constant. The precipitation data came from the Tropical Rainfall Measuring Mission (TRMM) and the Global Precipitation Measurement (GPM) mission and were validated with NOAA’s Global Surface Summary of the Day.

The second set of maps shows groundwater availability as observed by the Gravity Recovery and Climate Experiment (GRACE). Since 2006, the Middle East has experienced a net decrease in groundwater.

“We wanted to incorporate data from NASA’s Earth-observing satellites, specifically on precipitation,” said Vishal Arya, who worked on the project at NASA Langley Research Center. “We looked for a correlation between precipitation and environmental factors that could be used to identify areas that would be good candidates for a rainwater harvesting system.”

“NASA has served as an invaluable resource, providing WRAP with a readily available decision-making tool,” said Brendan McGinnis, Executive Director of WRAP. “The satellite data show specific numbers over areas affected with limited rainfall and groundwater, rather than us approximating those measurements.”

Before the PrIME tool, WRAP set up rainwater harvesting systems in ten different schools across the Middle East. Now, WRAP has expanded its efforts into Jordan and Palestine. McGinnis hopes to have similar success as its existing programs. At the Al-Afaq School for Special Education in East Jerusalem, WRAP’s rainwater harvesting system has provided nearly 70 percent of the school’s total water needs. Other schools have depended less on water provided by the city.