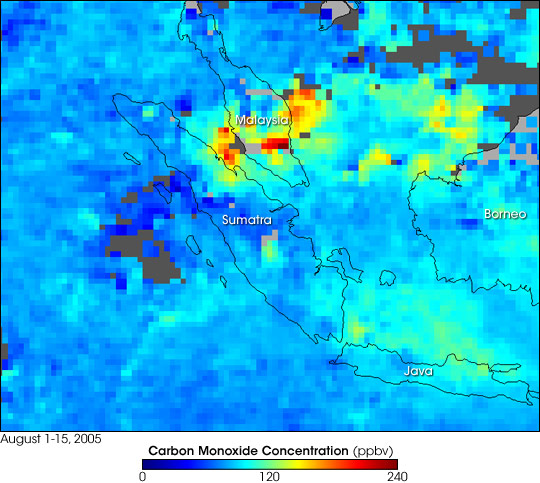 The noxious haze that prompted Malaysian officials to declare an air quality emergency in many locations in early August 2005 had eased after a shift in the winds and rain cleared the air. The haze was being generated by intense forest fires burning in Sumatra. Smoke began to build up over Malaysia on August 2, 2005, closing schools and businesses in the worst haze crisis since 1997-1998, the Associated Press reported. The haze lifted starting on August 13, though the fires were still burning.

In addition to smoke, the fires released large amounts of carbon monoxide into the atmosphere, which were detected by the Measurements of Pollution in the Troposphere (MOPITT) radiometer on NASA’s Terra satellite. Carbon monoxide is a good tracker of pollution because it is produced as a by-product of the combustion associated with wildfires and agricultural fires.