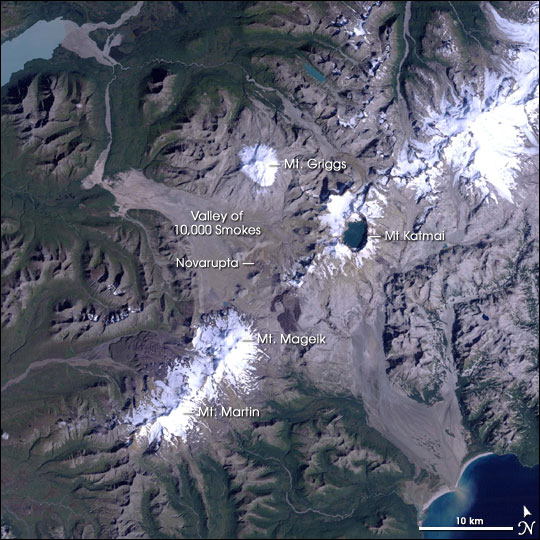 The Katmai National Park and Preserve is located in mainland Alaska where the Alaska Peninsula first begins to reach southwestward into the Bering Sea. Very little was known about this area, at least to European people, as recently as a hundred years ago, but on June 6, 1912, the region entered the record books as it gave rise to the century’s largest volcanic eruption in North America. So poorly known was the area, however, that it was unclear at first which of the many volcanic peaks in the area had erupted. Scientists studying ash flow and deposit patterns were able to determine the “King of Volcanoes” had been Novarupta, not Mount Katmai as people had assumed at first.

This satellite image shows the Valley of 10,000 Smokes region of the park and the surrounding volcanoes. The valley’s name came from the writings of a National Geographic Explorer, Robert Griggs, who visited the area in the years following the eruption. From his perspective on a nearby mountain (named for him), he surveyed the ash-filled valley stretching out below and described thousands of smoking fissures etching the ash field. Today, only a small circular dome marks the origin of the eruption from the Novarupta crater. But the remains of the record-breaking ash fall are still visible across the valley floor. So rich is the area in peaks that many have some unassuming names as “Unnamed 2”, “Volcano 1”, and “Cone 3110”.

The Novarupta eruption lasted for two days, and it perturbed weather patterns throughout the world. A foot of ash or more covered as much as three thousand square miles, and nearly ten times that area received at least an inch of ashfall. The mean temperature in the last six months of 1912 in the northern hemisphere was lowered by the reflective dust ejected up by the eruption. Recently, NASA and the National Science Foundation funded a group of scientists to study the effect of the 1912 eruption and others on global climate patterns.

The Thematic Mapper Plus (TM) instrument on Landsat 5 acquired this scene on September 3, 1994. This natural-color composite was created by combining red, greeen, and blue wavelength data (TM bands 3, 2, & 1).