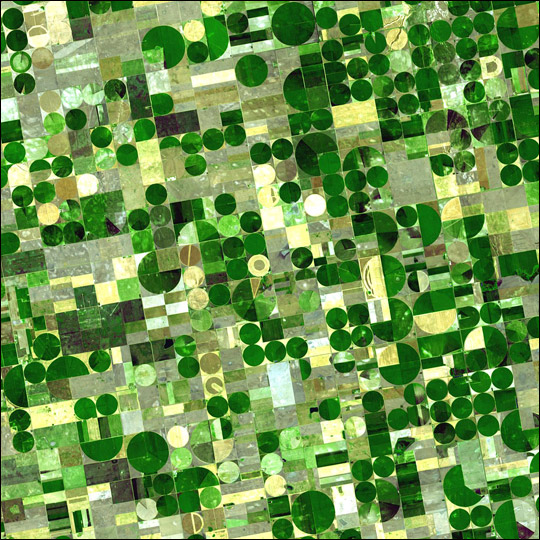 Resembling a work of modern art, variegated green crop circles cover what was once shortgrass prairie in southwestern Kansas. The most common crops in this region—Finney County—are corn, wheat, and sorghum. Each of these crops was at a different point of development when the Advanced Spaceborne Thermal Emission and Reflection Radiometer (ASTER) captured this image on June 24, 2001, accounting for the varying shades of green and yellow. Healthy, growing crops are green. Corn would be growing into leafy stalks by late June. Sorghum, which resembles corn, grows more slowly and would be much smaller and therefore, possibly paler. Wheat is a brilliant gold as harvest occurs in June. Fields of brown have been recently harvested and plowed under or lie fallow for the year.

Like crops throughout large sections of the U.S. Midwest, these crops are partly fed by water from the Ogallala Aquifer, a giant layer of underground water. One of the largest underground repositories in the world, the Ogallala Aquifer lies under about 450,000 square kilometers of the Great Plains—an area that includes parts of eight U.S. states. The water is between 30 and 100 meters below ground, and the amount of water in the aquifer varies greatly from region to region.

Though the aquifer is a reliable source of water for irrigated cropland, there are some concerns that it could eventually run dry. Most of the water in the aquifer is “fossil water” from the last ice age. The rivers and streams that initially fed the aquifer have long since disappeared in the geologic development of the West after the last ice age. Water now takes a long time to trickle down through the soil to recharge the aquifer, though the rate varies from region to region. Like a bank account, if more water is taken from this underground bank than is deposited into it, it could run dry. For this reason, efforts are being made to conserve the water of the Ogallala Aquifer.

One conservation measure is using water more wisely so less is drawn out of the aquifer. Farmers in this region have adopted a more efficient irrigation method, central pivot irrigation. Central pivot irrigation draws water out of a single well in the center of the field. Long pipes perched on wheels rotate around the pivot, showering the crops with water. Because the water falls directly on the crops instead of being shot into the air as occurs with traditional sprinklers, less water is lost to evaporation and more goes to nourishing the growing plants. Central pivot irrigation also creates perfectly circular fields, as seen in this image. The fields shown here are 800 and 1,600 meters (0.5 and 1 mile) in diameter.