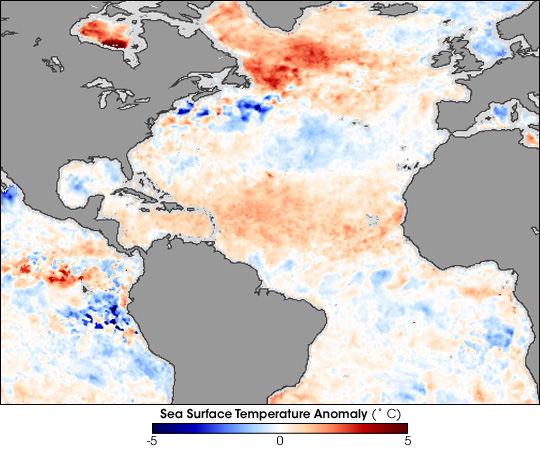 A band of abnormally warm water, shown in red, spans the Atlantic Ocean from Africa to Central America in this sea surface temperature image from August 5, 2005. The warm region—Hurricane Alley—is the birthplace of hurricanes in the Atlantic, and unusually warm waters means that storms have plenty of fuel to develop.

Hurricane Alley is heating up, and temperatures are warmer than average (1985-1997). Not only does this mean that hurricanes may be more likely to form, but the weather pattern that is causing the ocean to warm can also steer storms straight for Florida. The pattern may also be responsible for the July 2005 heat wave that swept across the Midwestern United States.

Normally, a large area of high atmospheric pressure sits firmly entrenched over the Atlantic Ocean. Called the Bermuda or Azores High because the center of the high pressure system shifts back and forth between the two islands, the system stirs air around the North Atlantic in a giant clockwise circle. A high-pressure system pushes air down toward the surface, causing it to warm and dry out. In the warmer, drier air, fewer clouds form to shield the ocean from the sun, allowing water temperatures to rise.

In the summer of 2005, the Bermuda High has been extended to the south and west, letting Hurricane Alley bake under relatively clear skies. The result is the streak of warm water seen in this image. Since one of the ingredients necessary for a hurricane to develop is warm ocean water (at least 28 degrees Celsius or 82 degrees Fahrenheit), this streak could lead to more hurricanes during the 2005 season. On August 2, the National Oceanic and Atmospheric Administration (NOAA) increased their predictions for the 2005 season, warning that 11-14 storms may form between August and November in addition to the 9 that have already pushed through the Atlantic.

The south- and westward extension of the Bermuda High affects more than sea surface temperatures. Remember, the Bermuda-Azores High spins the air over the Atlantic in a giant, clockwise circle. As hurricanes develop in Hurricane Alley, along the bottom side of the #8220;clock,” they travel west around the edge of the high pressure system. Often, the clockwise circulation pattern will bend storms northward into the Atlantic before they make landfall on the East Coast. But with the edges of the high pressure system extending farther south and west than normal, storms can run into the United States as they make their northward turn around the high-pressure system. In 2004, with the Bermuda High in a similar position, a record four hurricanes pounded Florida in rapid succession.

The weather pattern could also be connected to the high temperatures across the Midwestern United States. Just as the Bermuda High can sweep hurricanes from the Atlantic into the United States, it also drags warm tropical air northward. Because the edge of the high sits farther west than normal (closer to the U.S. East Coast), hot humid air is circulating farther inland, leaving the Midwest hot and sticky.

This image was created from data gathered by the Advanced Microwave Scanning Radiometer-EOS (AMSR-E) on NASA’s Aqua satellite on August 5, 2005. AMSR-E was provided to the Aqua program by the Japanese Aerospace Exploration Agency (JAXA).