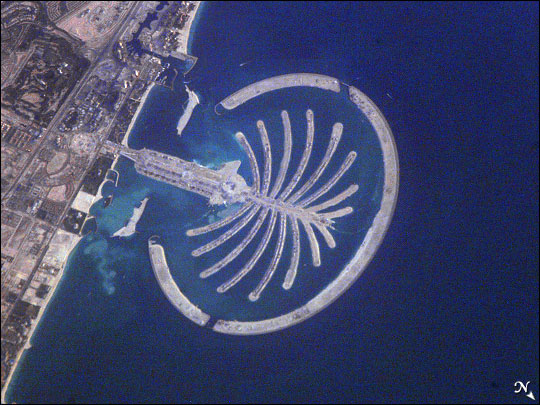 Palm Island is a resort under construction on reclaimed land silhouetted against the dark waters of Dubai’s Persian Gulf coast. Advertised as being “visible from the Moon,” this man-made, palm-shaped structure displays 17 huge fronds (leaves) framed by a 12-kilometer protective barrier. When completed, the resort will sport 2000 villas, 40 luxury hotels, shopping centers, cinemas, and other facilities.

An earlier image, shot by astronauts with a handheld camera in 2003, shows the outline of the palm nearing completion. Two years later, the palm appears in its all its glory to passing space travelers. It has so far required over 50 million cubic meters of sand to raise it above the sea surface. Palm Island is the last of three major developments designed to transform the Dubai coastline into a major coastal metropolitan area and tourist destination. When completed, the resort is expected to support a population of approximately 500,000 people.

Astronaut photograph ISS010-E-22273 was acquired April 1, 2005 with a Kodak 760C digital camera with an 800 mm lens. The image is provided by the ISS Crew Earth Observations experiment and the Image Science & Analysis Group at the Johnson Space Center. The International Space Station Program supports the laboratory to help astronauts take pictures of Earth that will be of the greatest value to scientists and the public, and to make those images freely available on the Internet. Additional images taken by astronauts and cosmonauts can be viewed at the NASA/JSC Gateway to Astronaut Photography of Earth.