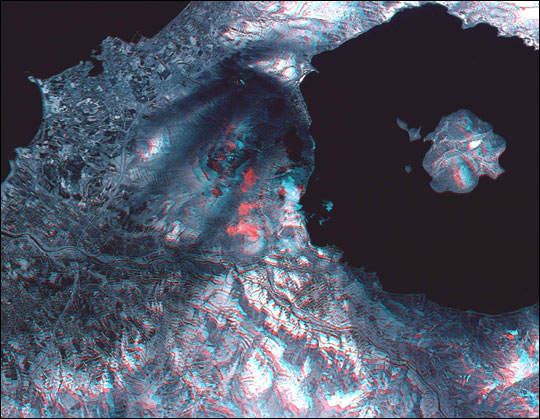 This anaglyph stereo image is of Mt Usu volcano. On Friday, March 31, more than 15,000 people were evacuated by helicopter, truck and boat from the foot of Usu, that began erupting from the northwest flank, shooting debris and plumes of smoke streaked with blue lightning thousands of feet in the air. Although no lava gushed from the mountain, rocks and ash continued to fall after the eruption. The region was shaken by thousands of tremors before the eruption. People said they could taste grit from the ash that was spewed as high as 2,700 meters (8,850 ft) into the sky and fell to coat surrounding towns with ash.

A 3-D view can be obtained by looking through stereo glasses, with the blue film through your left eye and red film with your right eye at the same time. North is on your right hand side.