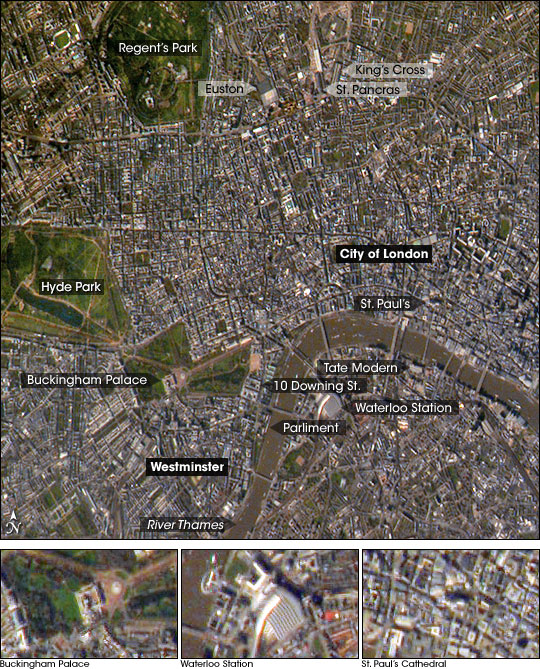 Numerous well-known landmarks appear in this detailed view of London taken from the International Space Station. To capture the shot, the astronaut had to look back along the Space Station’s ground track, from a position over northern Germany. The most striking visual features are green open spaces such as Regent’s Park, Hyde Park and St. James’s Park east of Buckingham Palace. Many smaller parks indicate why Londoners are proud of being able to walk miles through the city mainly on grass. The River Thames—with its bridges and barges (some of the more than 14,000 craft registered to sail the Thames)—is the axis upon which the city was founded in Roman times.

The relatively small area known as the City of London coincides with the ancient walled Roman city of Londinium on the north bank of the river (the line of the wall is marked closely for almost its entire length by modern streets), and includes St. Paul’s Cathedral near where the Roman temple stood. For scale, the river is 265 meters wide near St. Paul’s. The City is the financial center while Westminster is the center of government, including the Houses of Parliament and 10 Downing Street, where the British Prime Minister lives.

Astronaut photograph ISS010-E-22495 was acquired April 2, 2005, with a Kodak 760C digital camera with an 800 mm lens. The image is provided by the ISS Crew Earth Observations experiment and the Image Science & Analysis Group at the Johnson Space Center. The International Space Station Program supports the laboratory to help astronauts take pictures of Earth that will be of the greatest value to scientists and the public, and to make those images freely available on the Internet. Additional images taken by astronauts and cosmonauts can be viewed at the NASA/JSC Gateway to Astronaut Photography of Earth.

Greenwich is situated on the south shore of a sharp bend in the River Thames, just southeast of the City of London and is part of Greater London. Here is located the world famous Royal Observatory where the Prime Meridian, dividing East and West Longitude, was defined by international agreement in 1884.