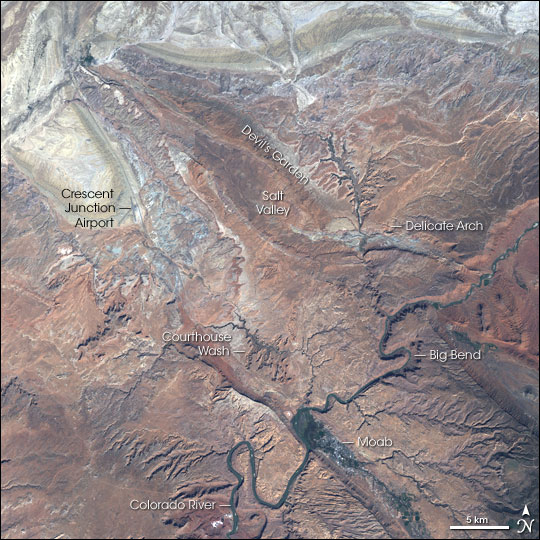 Arches National Park in Utah is home to some 2,000 arches and windows in rock, as well as rock spires and pinnacles. Originally established as a national monument in 1929 by President Herbert Hoover, Congress gave it national park status in 1971. The park covers about 119 square miles of arid land. The average annual rainfall in the park is a mere 10 inches (25 cm). As well as its better-known stunning rock formations, the park is also home to many rare and endangered species, including the Bald Eagle and Mexican Spotted Owl. The Colorado River is home to six species of fish, four of which are endangered (the Bonytail and Humpback Chub, Razorback Sucker, and Colorado Pikeminnow). The area has had human residents on and off over the past 10,000 years since the end of the last Ice Age. The first European explorers reached the area in the 1840s and documented the fantastic rock formations.

This Landsat 7 image of the park shows a large-scale view of the canyons and rock formations. This natural-color image of the area shows the pale red colours of the sandstone, as well as white salt and halite. The deep fissures in the land show the drainage patterns in detail. These dry features, which fill rapidly with runoff from heavy rain, are known as washes. The deep canyon carved by the Colorado River is unmistakable, as is the verdant green of vegetation in the canyon where the river flood plain provides water in the otherwise arid landscape. The town of Moab appears as a checkered pattern of grey concrete and bright sheet-metal roofing. This image was acquired by the Enhanced Thematic Mapper Plus (ETM+) instrument on Landsat 7 on October 3, 1999.

These formations are testaments to geological forces and processes going on in the park even today. Three hundred million years ago, this land was under ocean waters. As the sea evaporated, large salt deposits became mixed with sand. Gradually the sand and salt compressed into sandstone and halite (rock salt). Heating and cooling crack the surface into vertical slots called fins, and water enters. The salt dissolves in water, leaving a loose sand matrix which falls away. Gradually, this erosion can carve through the soft, sandy rock between adjacent fins and form a hole surrounded by rock. Once this opening is at least three feet long (even if it is only an inch high!), it is technically considered an arch. New arches continue to form and be found. Since the first person to discover a new arch is permitted to name it, visitors to Arches National Park are encouraged to look closely around them! However, since the land is soft and loose, and covered by delicate cryptobiotic soil crust, visitors are also strongly encouraged to remain on the trails.