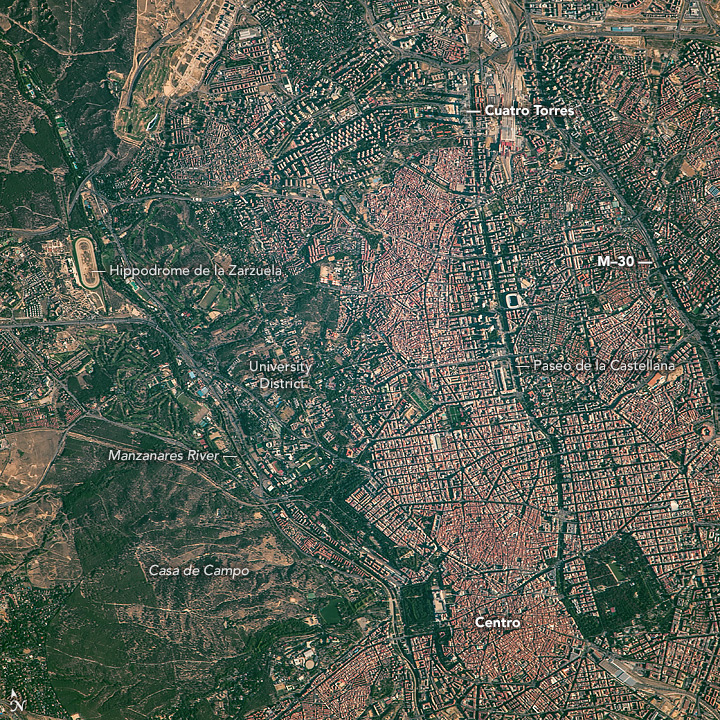 With the most powerful lens available on the International Space Station, an astronaut took this photograph of Madrid, Spain’s capital. Home to 6.5 million people, Madrid is the third-largest city in the European Union, after London and Berlin.

The Manzanares River crosses the left side of the image, with the city’s largest park—Casa de Campo—to its west. The ancient center of Madrid, known as the Centro district, is east of the river. A wide, tree-lined triple thoroughfare known as the Paseo de la Castellana crosses the entire image. The renowned Santiago Bernabeu Stadium, home to the Real Madrid football (soccer) club, lies along this major thoroughfare. A key business center with soaring skyscrapers, the Cuatro Torres (Four Towers), is also located on this avenue; the long, straight shadows of four towers stand out in the morning light.

Madrid features modern infrastructure—such as the M-30 highway—but the city has also managed to preserve many of its historic neighborhoods and streets, especially in the Centro district. In that area, the ancient pattern of small, irregular city blocks contrasts with larger blocks and straighter streets in the surrounding, younger neighborhoods. Landmarks in and around the Centro district include the Royal Palace of Madrid, a great square building with one of the largest footprints in the city, and the city’s main cathedral. The district also houses the Royal Theatre, several art museums, and Spain’s national library.

Madrid is known as one of the most livable cities in the world. This is partly due to the green, wooded spaces that show up so clearly in this image, especially the woodlands along the Manzanares River. This enormous urban parkland stretches from the city center for many kilometers to the west. It is Madrid’s so-called “green lung” and is the largest urban park in Spain. Also lush and green is the spacious university district, which is home to some of the oldest universities in the world. A large racecourse, the Hipódromo de la Zarzuela, is also located in this green zone.

Astronaut photograph ISS045-E-15741 was acquired on September 18, 2015 with a Nikon D4 digital camera using a 1150 mm lens, and is provided by the ISS Crew Earth Observations Facility and the Earth Science and Remote Sensing Unit, Johnson Space Center. The image was taken by the Expedition 45 crew. The image in this article has been enhanced to improve contrast. The International Space Station Program supports the laboratory as part of the ISS National Lab to help astronauts take pictures of Earth that will be of the greatest value to scientists and the public, and to make those images freely available on the Internet. Additional images taken by astronauts and cosmonauts can be viewed at the NASA/JSC Gateway to Astronaut Photography of Earth. Caption by M. Justin Wilkinson, Texas State U., Jacobs Contract at NASA-JSC.