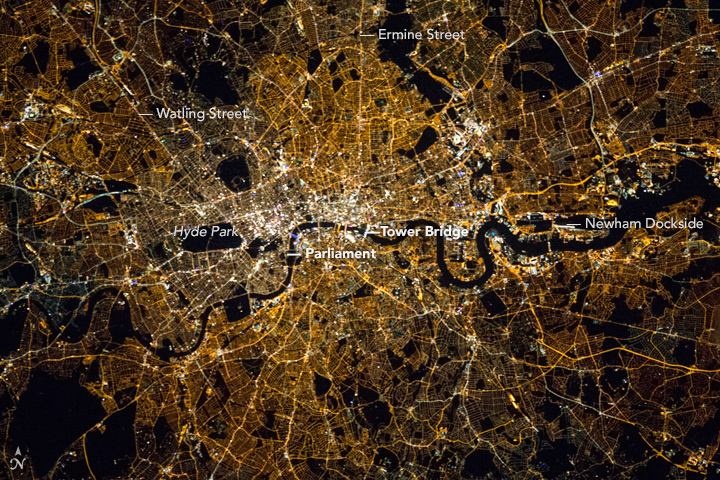 Much of London and its suburbs are visible in this photograph taken from the International Space Station. Two of the characteristics that stand out at night are the progressively denser concentrations of lights and the change from yellower to whiter lights as you move towards the commercial center of the city.

The central zone, known as the City of London, lies on the meandering River Thames, as it has for centuries. The dark river basin runs west to east through the city and widens downstream as it heads toward the sea (to the right). Several bridges cross the river, the brightest being Tower Bridge.

Major open spaces are black in this city known for its profusion of parks. One of the largest is the famous Hyde Park in London’s West End. Other open spaces are college campuses, cemeteries, and golf courses. The best-known parts of the city include the political zone—Whitehall and Parliament—that lies just outside the brightest zone.

The Port of London, now the United Kingdom’s second largest port, stretches along the Thames from the city center and eastward past the Isle of Dogs (the large meander on the east side) and beyond the image margin. The port zone, with its associated industries, is marked by patchy dark zones of the open water at the various docks (such as Newham Dockside) interspersed with bright spots at port installations.

Two remarkably straight and well-lit roadways extend north from the city center. These modern roads follow almost exactly the Roman roads known as Watling Street and Ermine Street. Within London, today’s well-known and busy Edgware Road follows Watling, while modern Kingsland Road follows Ermine. These Roman roads were hundreds of miles long, built to administer all of England. Watling Street connected the coast at Dover with the northwest parts of England, and Ermine Street connected London to York in the north. With the location of the city center on the river, these roads are prime examples of patterns that persist in the geography of cities for centuries.

This night view is detailed enough to be matched with a detailed daylight image of the central city. Crews also have taken other night views of the London region, such as this wider view captured in 2003 that shows the central brightly lit zone and the ring road known as the Orbital. A regional view of Northwest Europe at night, taken in 2011, shows the entire London urban region contrasted against the surrounding dark country areas.

Astronaut photograph ISS045-E-32242 was acquired on September 27, 2015, with a Nikon D4 digital camera using a 400 millimeter lens, and is provided by the ISS Crew Earth Observations Facility and the Earth Science and Remote Sensing Unit, Johnson Space Center. The image was taken by a member of the Expedition 45 crew. The image has been cropped and enhanced to improve contrast, and lens artifacts have been removed. The International Space Station Program supports the laboratory as part of the ISS National Lab to help astronauts take pictures of Earth that will be of the greatest value to scientists and the public, and to make those images freely available on the Internet. Additional images taken by astronauts and cosmonauts can be viewed at the NASA/JSC Gateway to Astronaut Photography of Earth. Caption by M. Justin Wilkinson, Texas State U., Jacobs Contract at NASA-JSC.