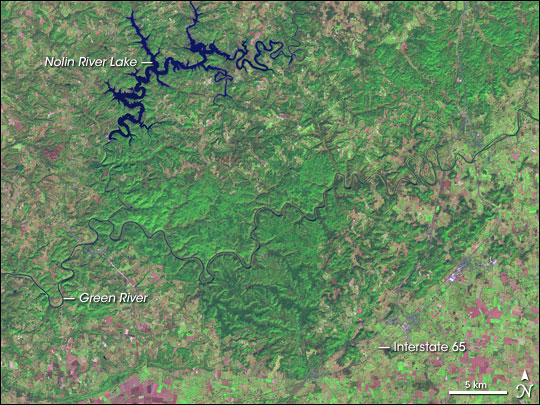 Mammoth Cave National Park lies under sandstone-capped ridges in the hills of southern Kentucky. At present, some 350 miles (500 kilometers) of passages are known, and as much as 600 additional miles may exist, making it the largest known cave system in the world. Archeological evidence indicates that American Indians living in the area began exploring the cave system in the late Archaic period between 5,000 and 3,000 years ago. European settlers first found the caves in 1798. The caves and about 53,000 acres above them became a national park in 1926 and a U.N. World Heritage Site in 1981.

This Landsat image gives little hint of the vast caverns beneath the surface, even though the ecosystems above and below the ground are intimately connected. However, the image does show the striking difference between the protected parkland in the image center and the surrounding area. Green shows healthy vegetation, exposed land is pink, and concrete-based structures (roads, cities) appear in various tones of grey. The Green River runs through the middle of the parkland in deep blue. Beyond the park boundaries, the land surface changes character, with farmland and settled areas to the south, and smaller, valley-floor farms to the north. The deep blue, serpentine shape at upper left is the Nolin River Lake.

The cave system results from the region’s karst topography, whose origins go back 350 million years to when this part of Kentucky was inundated by a shallow sea. The shells from dead marine organisms accumulated on the bottom of the sea over millions of years. Eventually, compression turned the shell layer, which was as thick as 700 feet (200 meters), into limestone and shale. As time passed, a river covered much of the limestone deposit with an additional fifty to sixty feet of sand, which compressed into sandstone. By 3 million years ago, geologic forces had lifted up the limestone plateau with its protective sandstone cap.

Rainwater percolated through the sandstone and dissolved some of the underlying limestone, then drained away into the Green River. Over time, the water created cavities in the limestone. The cavities grew into caverns and a network of underground streams and tunnels that are the modern Mammoth Cave system. This process continues to this day.

This false-color image was created from data collected by the Enhanced Thematic Mapper Plus (ETM+) instrument on the Landsat 7 satellite. The image combines infrared, near infrared, and green wavelengths (ETM+ bands 5, 4, & 2). The data was acquired on October 26, 1999.

Archaeological evidence indicates that American Indians living in the area began exploring the cave system in the late Archaic period, between 5,000 and 3,000 years ago. European settlers first found the caves in 1798.