OMI Sees the Soot Within Smoke 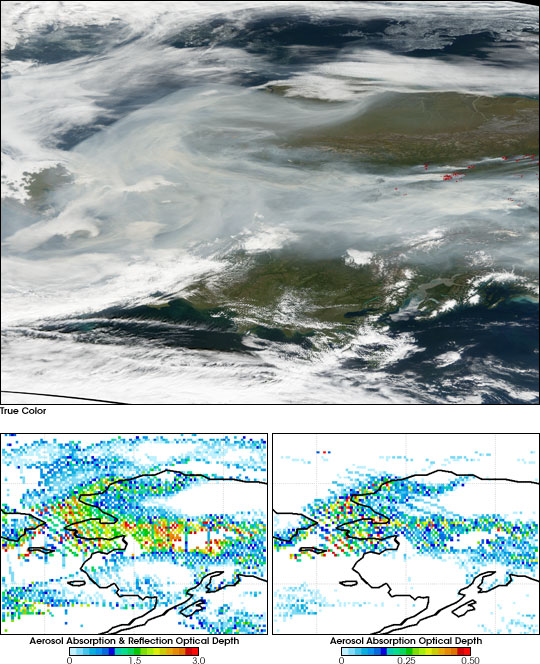 In the summer of 2004, more than 6.7 million acres went up in flames in Alaska. Smoke spread as far as Texas and Newfoundland. On August 21, 2004, two NASA satellites observed thick layers of soot-laced smoke billowing from the fires. Aqua’s Moderate Resolution Imaging Spectroradiometer (MODIS) provided a photo-like image (top), while Aura’s Ozone Monitoring Instrument (OMI) provided data for the color-coded images (bottom), which focus only on aerosols (particles in the atmosphere).

Aerosols absorb and reflect solar radiation, and so they are a major factor in climate change. Usually, light-colored aerosols reflect radiation, while dark-colored aerosols, such as soot, absorb it. For years scientists have been using satellites to measure aerosol optical depth. Optical depth describes how greatly aerosols are “interfering” with the passage of solar radiation through the atmosphere. High optical depths (shown in red) indicate a lot of aerosol.

For most satellite-based observations, aerosol optical depth combines both reflection and absorption by aerosols. Measuring the amounts of just the radiation-absorbing aerosols has been a goal of atmospheric scientists for a long time. Now scientists at NASA Goddard Space Flight Center have developed a method, pioneered with their experiences with the Total Ozone Mapping Spectrometer, of using OMI to measure the amounts of reflecting and absorbing aerosols separately. The scientists are cautiously thrilled about the new technique— cautiously because the approach is still new.

The image at lower left shows the total optical depth of the smoke layer (absorption plus reflection). The image at lower right shows the aerosol optical depth for only the radiation-absorbing soot in the smoke layer. In the MODIS image, a river of smoke billows westward from dozens of active fires (locations detected by MODIS have been marked in red). The soot-carrying plume curves eastward around the western end of the Brooks Range Mountains. The location of the soot detected by OMI matches up well with the thickest, brownish-colored parts of the smoke plume in the MODIS image.