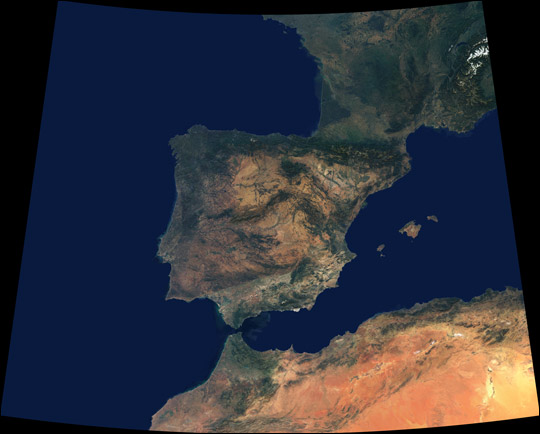 This natural-color satellite image shows the meeting place of Earth's second largest and second smallest continents: Africa and Europe. This image is a mosaic of numerous images captured throughout 2000-02 by the vertical-viewing (nadir) camera on the Multi-angle Imaging SpectroRadiometer (MISR) on NASA’s Terra satellite.

From the northeast (upper right), the image traverses a portion of the Swiss Alps (partially snow-covered) and a small part of Italy’s Po Valley, to the south of Alps. The northern portion of the image also includes the western coast of France and much of southern and southwestern France’s undulating terrain, which narrows as it approaches the foothills of the Pyrenees Mountains. The Pyrenees act as the natural frontier to the Iberian Peninsula—a landmass comprised of Spain (most of the center of the peninsula) and Portugal (along the west coast). The peninsula’s landscapes are extremely varied, with some almost desert-like, others green and fertile.

About half of Spain is situated atop a high plain, known as the Central Plateau, and many mountain ranges, rivers, geological “basement rock,” and vegetation types are found across this great plateau. The largest alluvial plain is Andalusia in the south, where the valley of the Guadalquivir River is shut in by mountain ranges on every side except the southwest, where the valley descends to the Atlantic Ocean (image left). The islands of Mallorca, Menorca and Ibiza are Spanish territories in the western Mediterranean Sea (image right). At the Strait of Gibraltar, the tips of Spain and Morocco very nearly kiss. Compared to northern Africa’s orange-colored deserts, Morocco appears relatively verdant along its northern coastal corner, as do the rugged Atlas Mountains that traverse the Mediterranean coastlines of northern Algeria and Morocco.

The Multi-angle Imaging SpectroRadiometer observes the daylit Earth continuously from pole to pole, and every 9 days views the entire globe between 82 degrees North and 82 degrees South latitude. This data product was generated from a portion of the imagery acquired during 2000-2002. MISR was built and is managed by NASA’s Jet Propulsion Laboratory, Pasadena, CA, for NASA’s Office of Earth Science, Washington, DC. The Terra satellite is managed by NASA’s Goddard Space Flight Center, Greenbelt, MD. JPL is a division of the California Institute of Technology.

Image courtesy NASA/GSFC/LaRC/JPL, MISR Team. Jim Knighton (jknighton@clear-light.com) of Clear Light Image Products produced the image mosaic. Please note that the image shown here is at a pixel resolution of approximately 1.1 kilometers, but a more detailed version at a resolution of 278 meters is available from the producer. Text by Clare Averill (Raytheon ITSS / Jet Propulsion Laboratory).

How On Earth Was This Image Made?

This image presents a remarkable view of the North Atlantic Ocean, stretching from the equator and western Africa northward to Iceland and Greenland, with sunset occurring over (north to south) Scandinavia, France, Spain, Algeria, Mali, and the Ivory Coast. How on Earth was this image made?