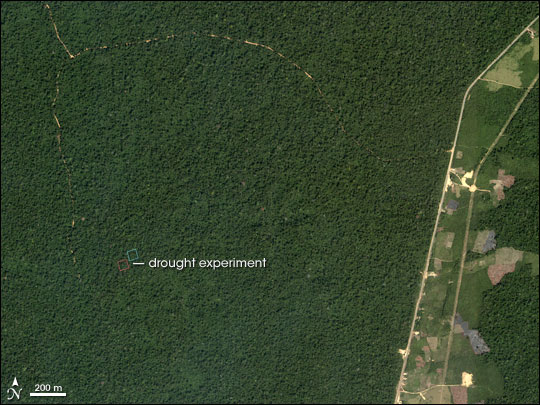 In November 2001, on a plot of land in the Amazon Rainforest in Brazil, an unusual experiment was drawing to a close. To figure out what effects severe droughts have on the rainforest, a team of scientists built an elaborate system of roofing panels, gutters, and trenches on a 0.01-square-kilometer (2.5-acre) site in the Tapaj’s National Forest in Brazil and diverted rainfall away from the site for months. The dry season was drawing to a close when this image of the experimental site was captured by the Ikonos satellite on November 3.

The image shows part of the Tapaj’s National Forest about 50 kilometers south of where the Tapajrsquo;s River joins the Amazon River. The orange-colored soil of a rough road peaks through the dense forest canopy in the left-hand part of the scene, while to the right, the much larger Santarém-Cuiabá Highway makes a clear boundary between the protected forest and developed areas. The location of the drought experiment is marked with colored boxes—red for the site where the scientists stole the rain, and green for the comparison site, where rain fell normally. Although the forest looks uniform from above, species diversity is so high that scientists had to survey 54 acres of tropical forest in order to find two plots with enough tree species in common for a good comparison.

It can come as a surprise that the rainforest experiences drought, but the eastern and southeastern parts of the forest actually go months each year with little or no rain. The trees survive by tapping soil moisture as far down as 20 meters. Identifying the precise signals of a drought-stressed forest would benefit the region’s farmers, timber operators, fire planners, and conservationists. Using data from a NASA satellite called Hyperion, scientists estimated how much the simulated drought affected the forests’ ability to photosynthesize and store carbon.

For more information about this experiment, a component of Brazil’s Large-scale Biosphere-Atmosphere Experiment in Amazonia, read Stealing Rain from the Rainforest