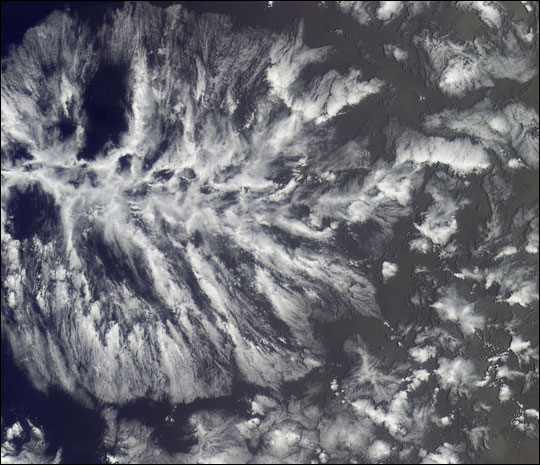 Here’s another chance to play geographical detective! This mystery concerns a particular type of cloud, one example of which was imaged by the Multi-angle Imaging SpectroRadiometer (MISR) in November, 2001. Usually, clouds take their names—cirrus, cumulus, and stratus—from Latin terms that describe the way they appear to someone standing on the ground. But clouds look very different when viewed from space, because satellites can detect, much more easily than a single observer on the ground, “cells” of cloudiness that form on scales ranging from tens to hundreds of kilometers. This image covers an area of 380 kilometers by 325 kilometers over the eastern tropical Pacific. Use any reference material you like and answer the following seven questions about the type of cloud shown in the image. The letters in parentheses associated with the correct answers, when put together, will spell out a relevant word. Submit this seven-letter word as your quiz solution.

Send us your answers, name (initials are acceptable if you prefer), and your hometown by the quiz deadline of Tuesday, March 22, 2005, using the Quiz answer form. Answers will be published on the MISR web site. The names and home towns of respondents who answer all questions correctly by the deadline will also be published in the order responses were received. The first 3 people on this list who are not affiliated with NASA, JPL, or MISR and who have not previously won a prize will be sent a print of the image.

A new “Where on Earth...?” mystery appears as the MISR “latest featured image” approximately once every two-to-three months. New featured images are released on Wednesdays at noon Pacific time on the MISR home page. The image also appears on the Atmospheric Sciences Data Center home page, though usually with a several-hour delay.