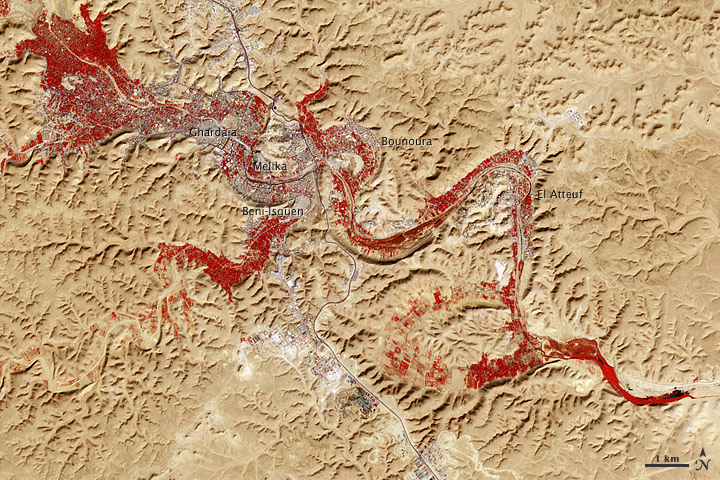 Less than 5 percent of Algeria’s land surface is suitable for growing crops, and most precipitation falls on the Atlas Mountains along the coast. Inland, dust-laden winds blow over rocky plains and sand seas. However, in north central Algeria—off the tip of Grand Erg Occidental and about 450 kilometers (280 miles) south of Algiers—lies a serpentine stretch of vegetation. It is the M’zab Valley, filled with palm groves and dotted with centuries-old settlements.

This oasis results from water that is otherwise in short supply in the Sahara Desert, thanks to the valley’s approximately 3,000 wells. Chemical analysis of Algerian aquifers, as well studies of topography in Algeria and Tunisia, suggest this region experienced a cooler climate in the late Pleistocene, and potentially heavy monsoon rains earlier in the Holocene. The M’zab region shows evidence of meandering rivers and pinnate drainage patterns. The vegetation lining M’zab Valley highlights this old river valley’s contours.

Cool summer temperatures and monsoon rains had long since retreated from the region by eleventh century, but this valley nevertheless supported the establishment of multiple fortified settlements, or ksours. Between 1012 A.D. and 1350 A.D., locals established the ksours of El-Atteuf, Bounoura, Melika, Ghardaïa, and Beni-Isguen. Collectively these cities are now a United Nations Educational, Scientific, and Cultural Organization (UNESCO) World Heritage site.

Because of the angle of sunlight, this image may cause an optical illusion known as relief inversion. 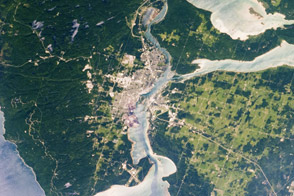 Landslide Buries Valley of the Geysers

Geysers are a rare natural phenomena found only in a few places, such as New Zealand, Iceland, the United States (Yellowstone National Park), and on Russia’s far eastern Kamchatka Peninsula. On June 3, 2007, one of these rare geyser fields was severely damaged when a landslide rolled through Russia’s Valley of the Geysers. The landslide—a mix of mud, melting snow, trees, and boulders—tore a scar on the land and buried a number of geysers, thermal pools, and waterfalls in the valley. It also blocked the Geyser River, causing a new thermal lake to pool upstream.