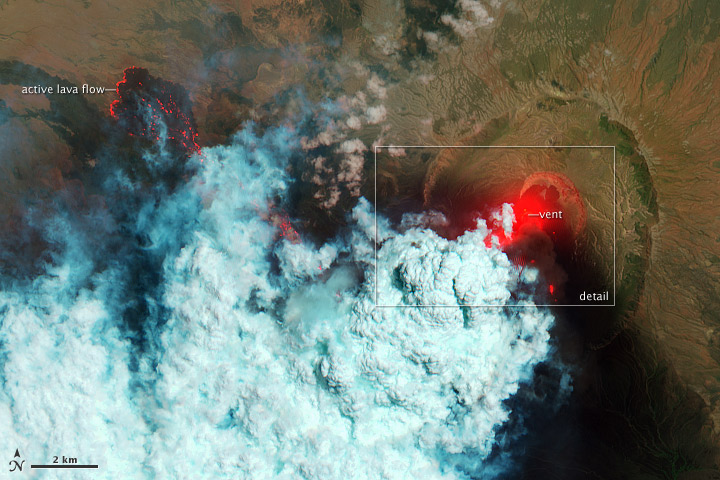 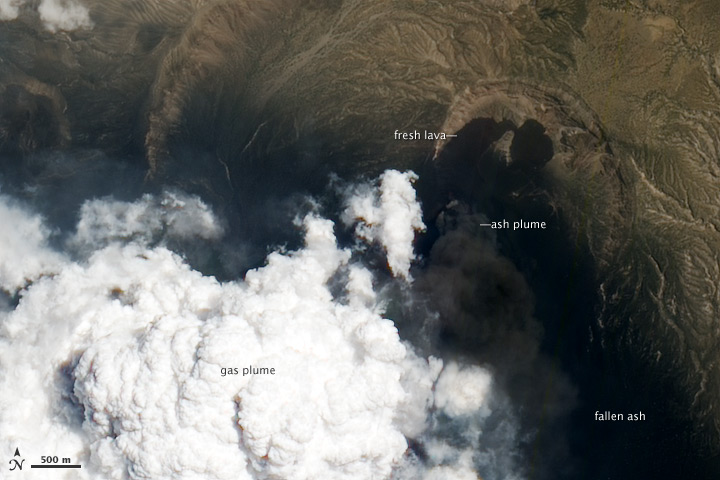 Since it began erupting on June 12, 2011, emissions from Eritrea’s Nabro Volcano have drifted over much of East Africa and the Middle East. Ash has displaced residents living near the volcano and disrupted flights in the region. Despite the volcano’s widespread effects, little is known about the eruption. Nabro is located in an isolated region along the border between Eritrea and Ethiopia, and few English-language reports have been published. Satellite remote sensing is currently the only reliable way to monitor the ongoing eruption.

This pair of satellite images are among the first detailed pictures of the erupting vent and lava flows. They were acquired by the Advanced Land Imager (ALI) aboard the Earth Observing-1 (EO-1) satellite on June 24, 2011.

The bright red portions of the false-color image (top) indicate hot surfaces. Hot volcanic ash glows above the vent, located in the center of Nabro’s caldera. To the west of the vent, portions of an active lava flow (particularly the front of the flow) are also hot. The speckled pattern on upstream portions of the flow are likely due to the cool, hardened crust splitting and exposing fluid lava as the flow advances. The bulbous blue-white cloud near the vent is likely composed largely of escaping water vapor that condensed as the plume rose and cooled. The whispy, cyan clouds above the lava flow are evidence of degassing from the lava.

The natural-color image (lower) shows a close-up view of the volcanic plume and eruption site. A dark ash plume rises directly above the vent, and a short, inactive (cool) lava flow partially fills the crater to the north. A gas plume, rich in water and sulfur dioxide (which contributes a blue tint to the edges of the plume) obscures the upper reaches of the active lava flow. Black ash covers the landscape south and west of Nabro. 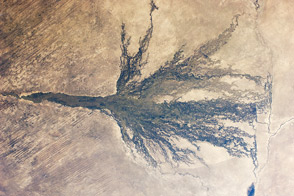 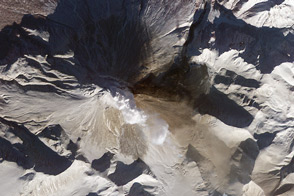