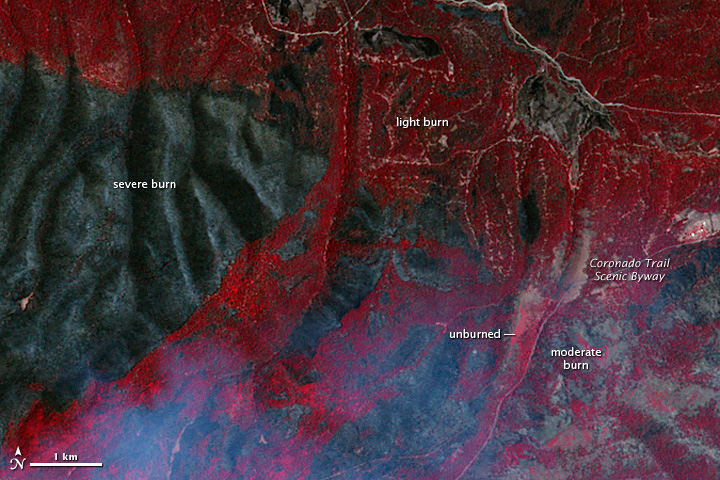 Even as firefighters finish containing the biggest fire in Arizona history, work is already underway to restore the forest. The first step in planning a recovery is to assess how badly the forest was burned, and satellite images like this one play a significant role.

Arizona’s Wallow Fire was first reported on May 29, 2011. Fueled by extremely dry conditions and helped by strong winds, the fire had burned 538,049 acres of forest in the White Mountains of eastern Arizona by June 28. But as it burned, the Wallow Fire was not all-consuming. This image shows areas that were completely burned, side-by-side with areas that were moderately or lightly burned or not touched at all.

The Advanced Spaceborne Thermal Emission and Reflection Radiometer (ASTER) on the Terra satellite acquired this image on June 21, 2011. Plant-covered land is red in the false-color image, which includes both visible and infrared light. Patches of unburned forest are bright red, in subtle contrast with slightly darker areas where flecks of black indicate some burning. The charcoal-colored areas burned severely. The severe burns are fringed by slightly lighter shades of gray where the burn was moderate. The fire was still burning when ASTER took this image, and the pale blue haze along the lower border is smoke.

Satellite images such as this one are necessary in assessing damage from extremely large or remote wildfires. Responders identify the most severely affected areas where the land may need to be stabilized to prevent further damage. Responders also use these assessments to create a recovery plan.