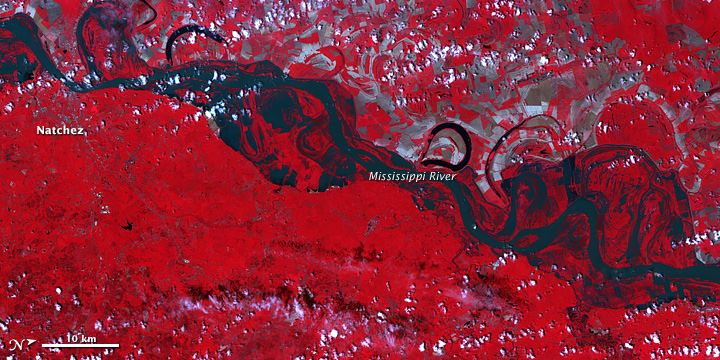 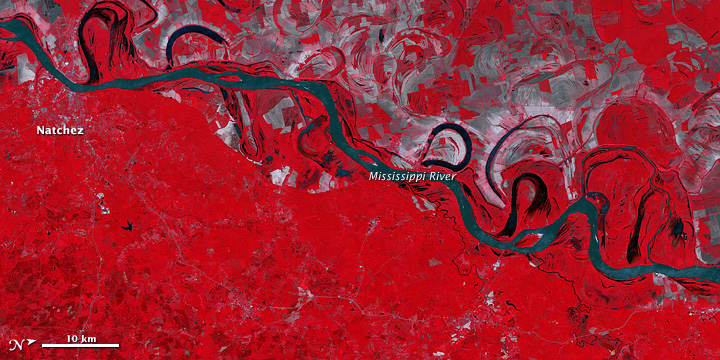 On May 13, 2011, the Mississippi River was approaching a record level at the city of Vicksburg, Mississippi, and had exceeded the previous record at Natchez, Miss. The Advanced Hydrological Prediction Service (AHPS) reported that the river reached 55.45 feet (16.90 meters) at 3:00 p.m. Central Daylight Time at Vicksburg, and 59.87 feet (18.25 meters) at 2:00 p.m. CDT at Natchez. The previous record for Natchez, set in 1937, was 58.04 feet (17.69 meters). The AHPS forecast that water levels would continue to rise in both locations.

The Advanced Spaceborne Thermal Emission and Reflection Radiometer (ASTER) on NASA’s Terra satellite captured these false-color images of the area around Natchez on May 11, 2011 (top), and April 21, 2007 (bottom).

The images combine infrared, red, and green wavelengths to form a false-color image that distinguishes between muddy water and land. Water is blue, and sediment-laden water is a dull blue-green. Vegetation is red, and the brighter the red, the more robust the vegetation. Red and gray patches west of the river (top edge of each image) are agricultural fields. Clouds are white, and cast shadows onto the land surface below.

In May 2011, the Mississippi River pushed over its banks onto floodplains. In some places, the flood waters almost reached oxbow lakes along the river.

On May 12, 2011, the Natchez Democrat reported that the city was on level two of a four-level evacuation plan. At level two, residents are encouraged to plan for an evacuation by gathering personal belongings that would be irreplaceable in the event of a flood. The paper further reported that authorities were gathering lists of elderly or homebound people so they could be safely moved in an evacuation.