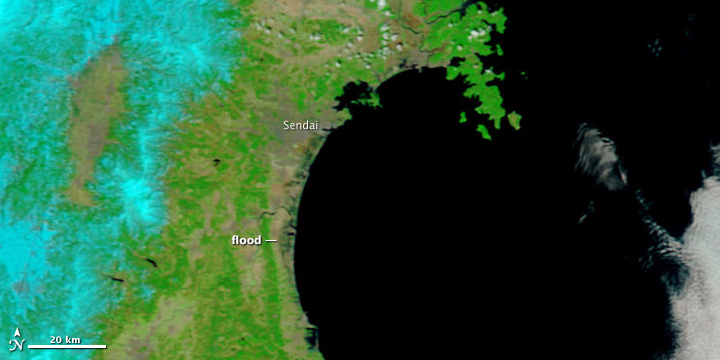 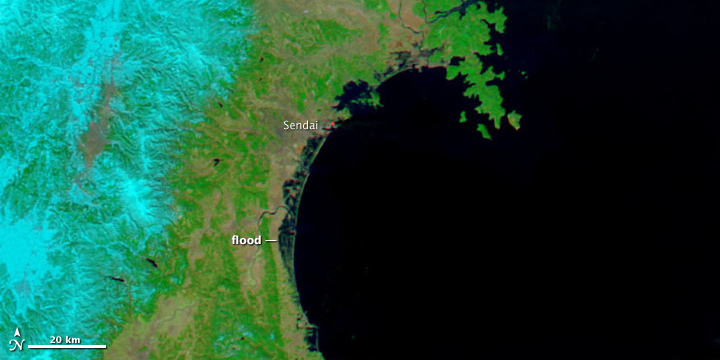 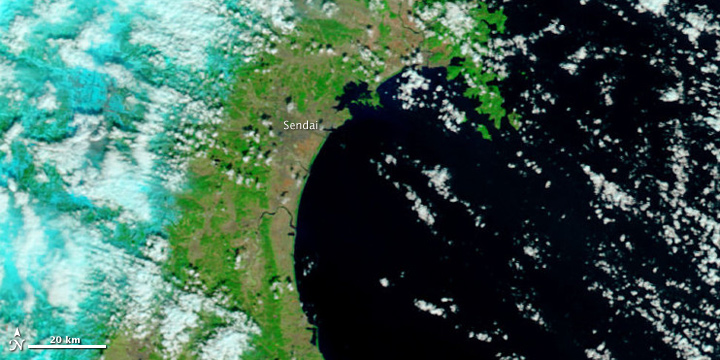 In moderate resolution satellite images, like these, we can’t see the human element of a disaster, but the images do provide perspective on the scale of a disaster. The lower two images (previously published on the Earth Observatory) reveal the physical extent of flooding over a wide area from north to south and several kilometers inland after tsunamis devastated the island on March 11, 2011. The top image, taken on April 1, shows that pockets of flooding still linger a full three weeks later, providing a sense of the long-term damage the waves wrought.

The images, all taken by the Moderate Resolution Imaging Spectroradiometer (MODIS) sensors on NASA’s Terra and Aqua satellites, show the Japanese coast near Sendai in a combination of visible and infrared light. This combination reveals the presence of water on the ground. Water (probably a muddy color in visible light) is black or dark blue in these images. Bare earth is tan-pink, plant-covered ground is green, and snow is turquoise. Urban areas, like Sendai, are cement-colored.

Though much of the flood water visible on March 13 (middle image) had receded by April 1, pockets of water linger like faint shadows on the tsunami-ravaged region. These flooded areas make it possible to see the extent of the tsunami flooding three weeks after it occurred. The lower image shows the area on February 26, before the disaster occurred.

The places that are still underwater are among the areas the Japanese military is searching for the more than 16,000 people that are still missing, reported the Associated Press. As of April 1, 11,700 deaths have been confirmed with an expected final death toll near 25,000.