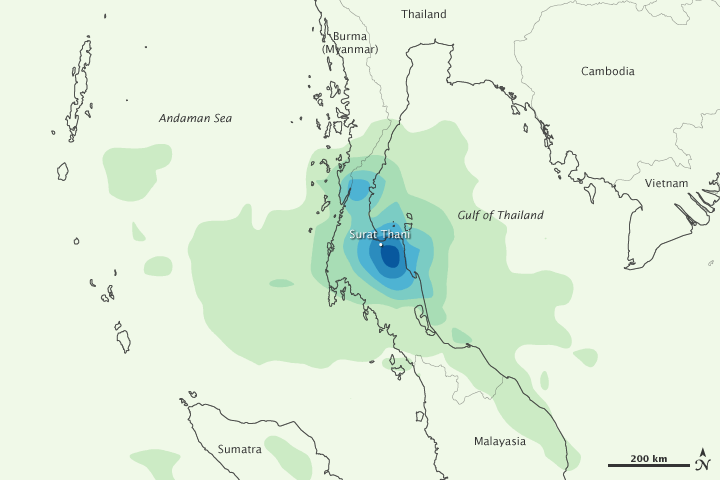 Normally the end of March brings dry weather to tropical Thailand. In 2011, however, a powerful storm settled over the Malay Peninsula, bringing up to 1,270 millimeters (50 inches) of rain in little over a week. The intense rain flooded 8 provinces, killing 13 and affecting 842,324 people as of April 1, said the government of Thailand.

This image, made from the Multi-satellite Precipitation Analysis based on data from the Tropical Rainfall Measuring Mission (TRMM) satellite, shows rainfall for March 23–30, 2011. Rainfall totals range from 200 millimeters (8 inches) to more than 1,200 millimeters (47 inches) across the Malay Peninsula. TRMM measured the most rain immediately south of the city of Surat Thani.

According to AccuWeather, the region usually receives 1–3 inches (25–76 mm) of rain in March, though heavy downpours do occur at other times of the year. The unseasonal rain caused landslides and widespread flooding. One landslide, in the Krabi province on the mountainous west side of the peninsula, destroyed a village, leaving 100 people missing, reported the Thai newspaper, the Nation.