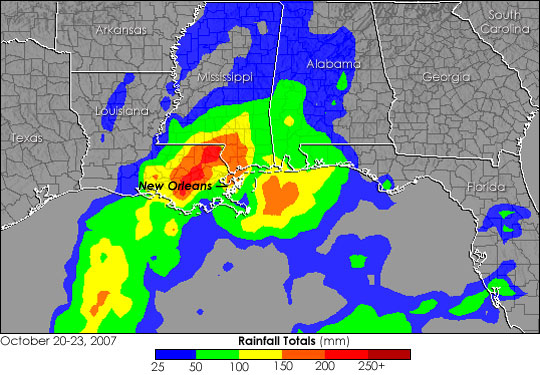 Flood-weary New Orleans found its streets filling with water once more on October 22, 2007, as heavy rain fell over the city. The rain came from a low-pressure system that moved over Louisiana, Mississippi, and Alabama from the Gulf of Mexico between October 20 and October 23. This image, made with the Multi-satellite Precipitation Analysis (MPA) at NASA Goddard Space Flight Center, shows rainfall totals during that three-day period. Based on data collected by the Tropical Rainfall Measuring Mission (TRMM) satellite, the MPA is used to monitor rainfall over the global tropics. The analysis shows that more than 200 millimeters (about 8 inches) of rain, represented by a band of red, fell in southeast Louisiana between October 20 and October 23. This area of intense rain is surrounded by a broader band of heavy rain with rainfall totals ranging from 200 millimeters (8 inches, orange) to 50 millimeters (2 inches, blue). A graph charting the amount of rain that fell over time reveals that as much as 40 millimeters (1.6 inches) of rain fell per hour between October 20 and October 23.

Apart from causing floods in New Orleans, the rain was welcome. A dry spring and summer left most of the southeastern United States in exceptional to severe drought. In North Carolina and parts of Georgia, the governors of each state have placed restrictions on non-essential water use as the current water supply may run out in a few months in many communities, said the U.S. Drought Monitor in its October 16 report. Though the rainfall from this storm could not supply enough water to end the drought, it did bring some relief.