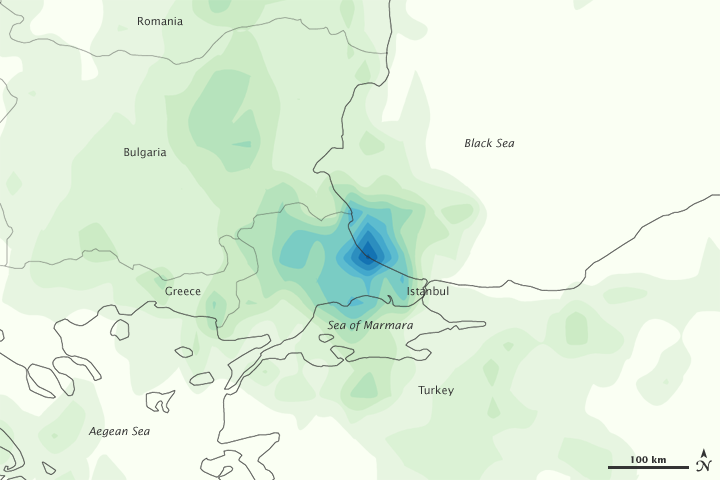 The heaviest rain in 80 years struck Istanbul in early September 2009. The rains began late in the day on September 7, but the worst rain fell overnight from September 8–9, 2009. According to a September 9 report from The New York Times, the floods had killed at least 31 people in and around the Turkish city.

This image shows estimates of rainfall for northwest Turkey and the surrounding region from September 2–9, produced by the near-real-time, multi-satellite precipitation analysis at NASA’s Goddard Space Flight Center. The analysis is based largely on observations from the Tropical Rainfall Measuring Mission (TRMM) satellite. The highest rainfall amounts appear in blue and the lightest amounts appear in pale green. Rainfall totals in this region are in excess of 125 millimeters (approximately 5 inches) with the highest totals right along the coast near 200 millimeters (roughly 8 inches). Almost the entire region received at least 50 millimeters (about 2 inches of rain). The average September rainfall for Istanbul is a little over 25 millimeters (1 inch).

The flash flooding resulted from slow-moving thunderstorms that dumped heavy rain in a relatively short period. The storm drew moisture from both the eastern Mediterranean and the Black Sea. In the city of Istanbul, lack of adequate drainage exacerbated the flooding caused by heavy rains. After just a few hours of rain, Istanbul’s low-lying areas were inundated, The New York Times reported.