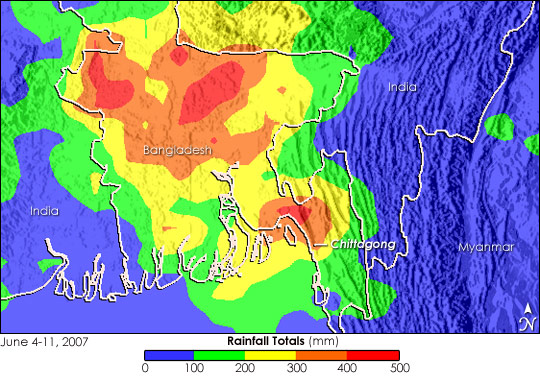 Bangladesh’s annual monsoon started with unusually heavy rain, intensified by a storm from the Bay of Bengal on June 9-10, 2007. By June 11, more than one-third of the southeastern coastal city of Chittagong was under water, reported the Australian Broadcasting Corporation. In addition to the floods, the rains triggered devastating landslides in the deforested hills on which the city is built. The country-wide death toll from the floods and landslides neared 130 on June 12, said Reuters. Most of the deaths were a result of the landslides or from buildings collapsing in the rain.

This image shows rainfall totals over Bangladesh between June 4 and June 11, 2007. The rainfall totals are from the Multi-satellite Precipitation Analysis, which is based on measurements from the Tropical Rainfall Measuring Mission (TRMM) satellite. Rainfall totals range from 0 to 100 millimeters (4 inches), shown in blue, to 400 mm (15.7 inches) to 500 mm (19.7 inches), shown in red. Most of the country received between 200 and 300 millimeters (7.9 to 11.8 inches) of rain during the week-long period, though there are several pockets of heavier rain. Chittagong sits in one such pocket, where up to 400 mm (15.7 inches) of rain fell.