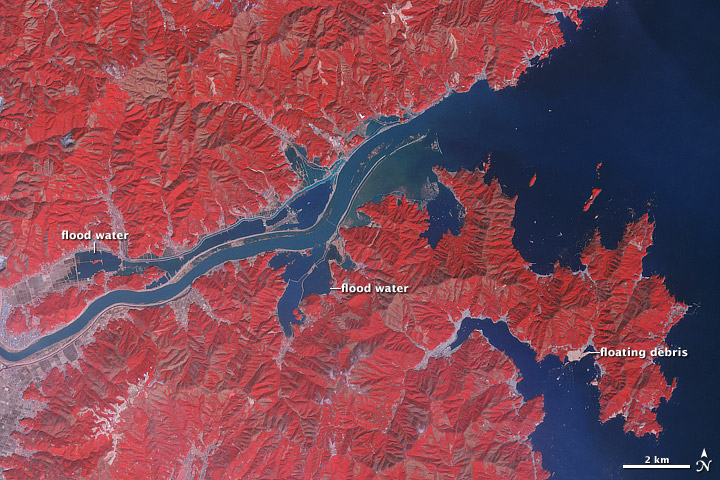 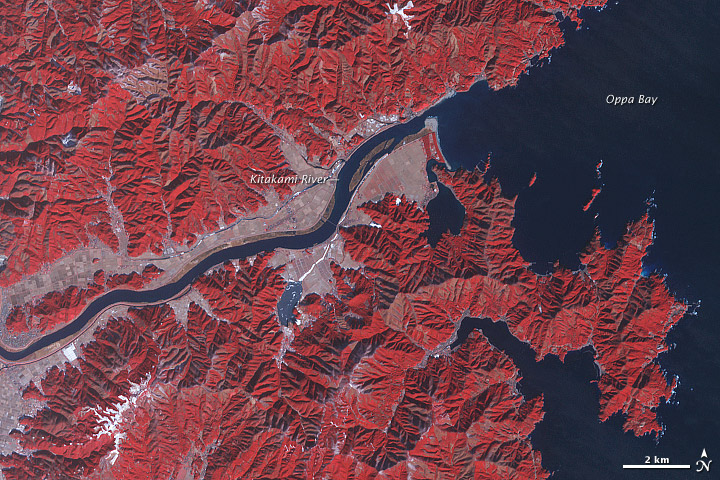 In the wake of the magnitude 9.0 earthquake and resulting tsunami that struck northeastern Japan in March 2011, ocean waters flooded croplands and settlements lining the Kitakami River. The Advanced Spaceborne Thermal Emission and Reflection Radiometer (ASTER) on NASA’s Terra satellite captured these false-color images before and after the tsunami. The top image is from March 14, 2011, and the bottom is from January 16, 2011.

The images combine infrared, red, and green wavelengths of light to form a false-color image that distinguishes between water and land. Water is blue. Buildings and paved surfaces appear in shades of blue-gray. Fallow fields appear in shades of beige and brown. Vegetation is red, and the brighter the red, the more robust the vegetation. (Brighter shades of red in March and duller shades in January result largely from the difference in season.)

In the March image, water has spilled over the banks both north and south of the river. Although agricultural fields appear to have escaped the flooding farther inland (image left), some fields closer to the ocean have seemingly disappeared into the sea. North of the Kitakami, floodwaters extend far enough inland to create what looks like a parallel river. Near the coast, only the rugged peaks rising above the floodplains have escaped inundation. Floating debris from the tsunami has accumulated in several coves (particularly image lower right).