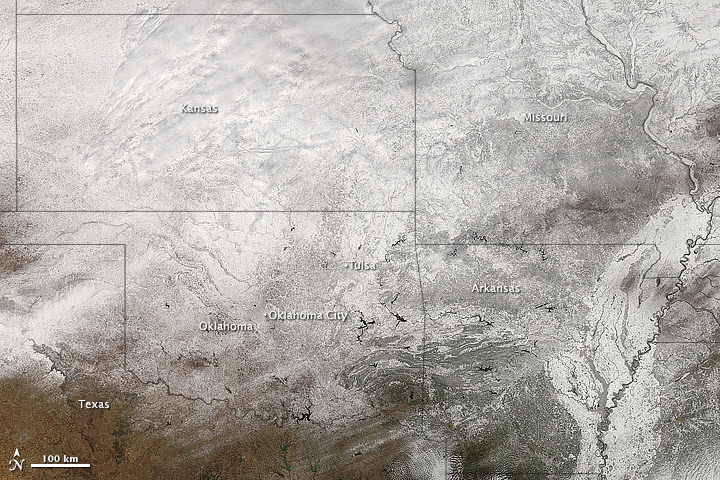 The icy fingers of winter 2010-11 reached down into the south central U.S. for the second time in a week, breaking many local records for snowfall in a month that is still only 10 days old.

Snowfall totals topped 20 inches (50 centimeters) in parts of Oklahoma, Kansas, and Arkansas, just one week after a Groundhog Day storm coated the region with several inches. Meanwhile, temperatures dropped into the single digits in the American Plains and in Colorado. The storms moved east to dump more snow, ice, and rain in Alabama, Mississippi, Tennessee and the Carolinas.

The Moderate Resolution Imaging Spectroradiometer (MODIS) on NASA’s Aqua satellite captured this clear view of the nation's mid-section at 1:25 Central Standard Time on February 10, 2011. Nearly all of the white in this image is snow and ice, except for a bit of clouds in the lower right (southeast) corner. In the larger image file, the outlines of the Ouachita and Ozark mountain ranges darken the snowy landscape, while river valleys such as the Mississippi appear brighter due to fewer trees. Gray-white areas are often developed, urban landscapes that have been coated by snow; some, however, are just rural areas that received less snow.

Tulsa, Oklahoma, received 5.5 inches (14 cm) of snow on February 9, bringing its total to 20.9 inches (53 cm) for the winter, the snowiest on record. In Oklahoma City, 6 inches (15 cm) fell as well, making February 2011 the second snowiest month (18 inches so far) in the state's records, behind March 1911 (20.7 inches). News outlets reported collapsed roofs on a number of public and private buildings and the state Health Department reported 80 storm-related injuries.

Between 12 to 17 inches of new snow fell in eastern and south central Kansas, and it has snowed as much this February as it usually does for an entire winter, a spokesperson for the Kansas Department of Transportation told Reuters.

The icy fingers of winter 2010-11 reached down into the south central U.S. for the second time in a week, breaking many local records for snowfall in a month that is still only 10 days old.