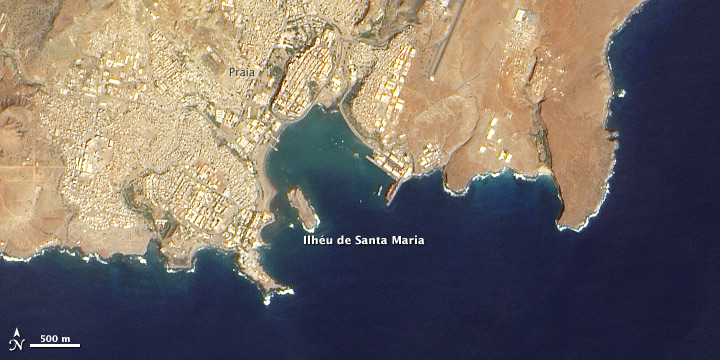 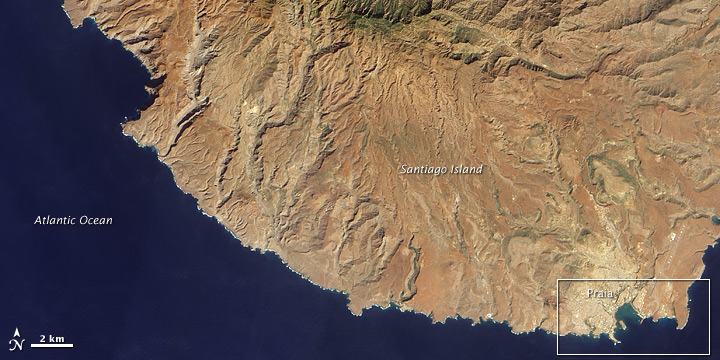 Born on February 12, 1809, Charles Darwin is best known for his theory of natural selection as a driving force in evolution. Yet he was also an accomplished geologist, studying earthquakes and the formation of coral atolls, among other topics. When he set sail on the Beagle in December 1831, he was determined to understand the geologic history of the places he visited. He did some of his first digging in Cape Verde, specifically on the islands of Santiago (St. Iago or St. Jago) and Ilhéu de Santa Maria (Quail Island in Darwin’s day).

The Advanced Land Imager (ALI) on NASA’s Earth Observing-1 (EO-1) satellite captured these natural-color images of Santiago and Ilhéu de Santa Maria on December 17, 2002. The top image is a close-up of Porto Praia (also Porto Praya), the harbor where the Beagle anchored in January 1832. The bottom image shows the rugged topography of Santiago. The area of the close-up is outlined in white in the wide-area view.

Only about 1 mile (1.6 kilometers) in circumference, Ilhéu de Santa Maria was small enough for Darwin to study in detail. He mapped rock layers and collected samples from each one, using the island as a key to understanding the much larger Santiago, which held tantalizing geologic clues of its own. On a cliff face near Porto Praia, Darwin noticed a bed of marine shells resting roughly 45 feet (14 meters) above sea level. He concluded that both islands “are volcanic islands that were submerged for some period beneath the sea, where they collected marine beds and then another layer of melted volcanic material.” He concluded that both islands had gained and lost elevation over time.

To support his hypothesis, Darwin pointed to the Temple of Serapis along the coast of Italy, which Charles Lyell had described in his recently published Principles of Geology. The land under the temple had previously sunk below the water line, enabling mollusks to bore into the temple’s stone pillars. After the land rose again, the borehole layers appeared as dark bands.

More recent geologic studies in Cape Verde have confirmed Darwin’s conclusions, not only about the islands’s volcanic origin, but also about elevation changes. A 2006 study published in Geology found that Cape Verde sits over a relatively stationary hotspot where magma pushes up through Earth’s crust. Hotspot melting has thickened the crust in the area, the study found, buoying the ocean floor underneath the islands of Cape Verde. A 2010 study published in Nature Geoscience concluded that multiple geologic processes under the ocean floor have raised Cape Verde at varying rates over the past 6 million years.

Acquired November 23, 2010, this natural-color image shows the islands of the Cape Verde Archipelago off the west coast of Africa.