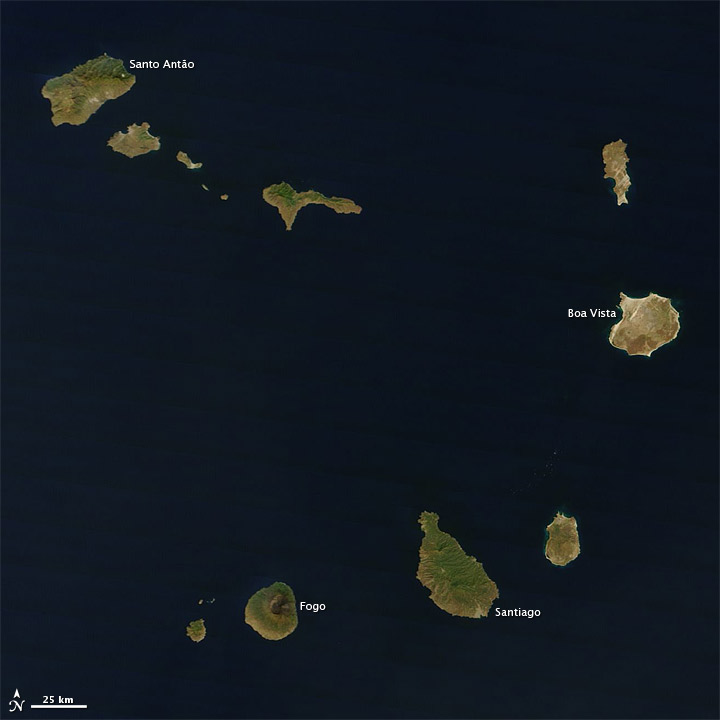 The Cape Verde Archipelago lies some 650 kilometers (400 miles) off the coast of Senegal. Clear skies allowed the Moderate Resolution Imaging Spectroradiometer (MODIS) on NASA’s Terra satellite to acquire this natural-color image of the island chain on November 23, 2010. Against a navy background, the brown and green islands roughly form the shape of a giant V turned on its side.

The island chain includes a variety of terrain and vegetation. On islands in the east—Boa Vista and its neighbors—earth tones predominate. These islands are generally flat with little fresh water. In the west, more mountainous islands boast more abundant greenery. The highest point in Cape Verde is in the southwest: the volcanic summit of Fogo at 2,829 meters (9,281 feet).

Despite the islands’ varied appearances, geologists surmise that all of the islands are volcanic in origin, sitting over a hotspot where magma pushes up through the Earth’s crust and erupts on the sea floor.

Probably the best-known example of a hotspot is Hawaii. On a fast-moving plate, the Hawaiian Islands show a clear linear progression in age, with old Kauai in the northwest and young Hawaii (Big Island) in the southeast. Cape Verde, however, is roughly stationary with respect to the mantle plume responsible for its growth. As a result, the ages of the islands lack the same clarity as in Hawaii. In general, Cape Verde islands appear oldest in the east (Boa Vista and its neighbors) and youngest in the northwest and southwest.

Volcanic activity is not the only force shaping Cape Verde. Just as magma elevates landmasses, relentless winds grind them down. Winds blow often over Cape Verde, and the winds frequently carry heavy loads of Saharan dust. Wind erosion may be more apparent along the islands from Boa Vista to Santo Antão, which bear the brunt of Saharan winds.

Acquired November 23, 2010, this natural-color image shows the islands of the Cape Verde Archipelago off the west coast of Africa.

Calm before the Dust Storm

Calm before the Dust Storm