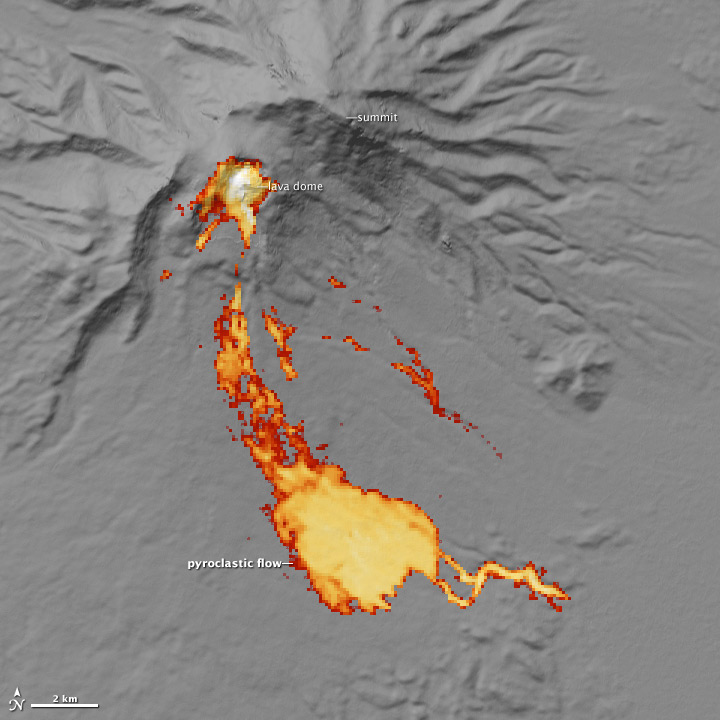 With a summit that reaches 3,283 meters (10,771 feet), Shiveluch is one of the largest and most active volcanoes in Russia’s Kamchatka Peninsula. At least 60 large eruptions of Shiveluch have occurred during the past 10,000 years, making it the most vigorous volcano of the Kuril-Kamchatka volcanic arc.

On January 25, 2011, the Advanced Spaceborne Thermal Emission and Reflection Radiometer (ASTER) on NASA’s Terra satellite detected a hot avalanche of volcanic debris—a pyroclastic flow—sliding down the south side of the volcano. This image shows the flow’s heat signature as measured in thermal infrared light. The white area at the lava dome is very hot, while the red areas on the edge of the flow are just warmer than the surrounding snow.

The hot trail of material descending to the south forms a large distributed deposit, indicating a recent collapse of the lava dome and formation of a large debris avalanche. According to the Global Volcanism Program, Shiveluch’s current eruptive period began in 1999.

This thermal infrared image reveals a hot avalanche of volcanic debris sliding down the southern slope of Russia’s Shiveluch volcano on January 25, 2011. 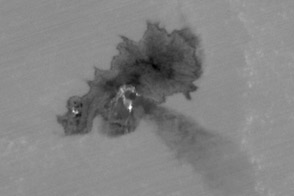 A New Perspective on Shiveluch Volcano

Satellites provide a new perspective on the ongoing eruption of Shiveluch Volcano.