A New Perspective on Shiveluch Volcano 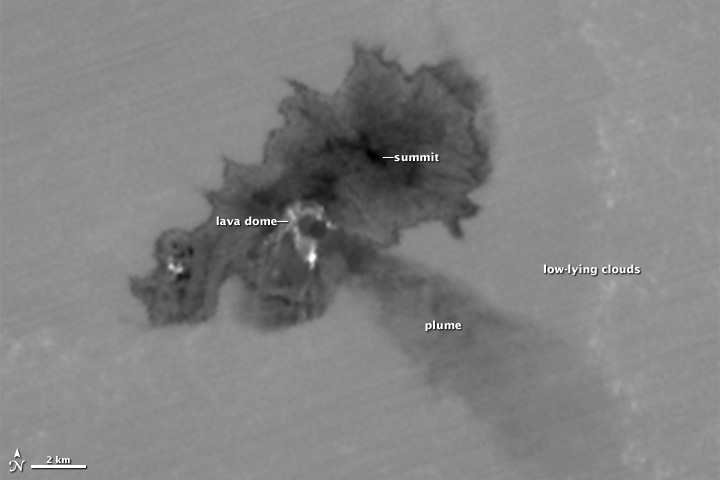 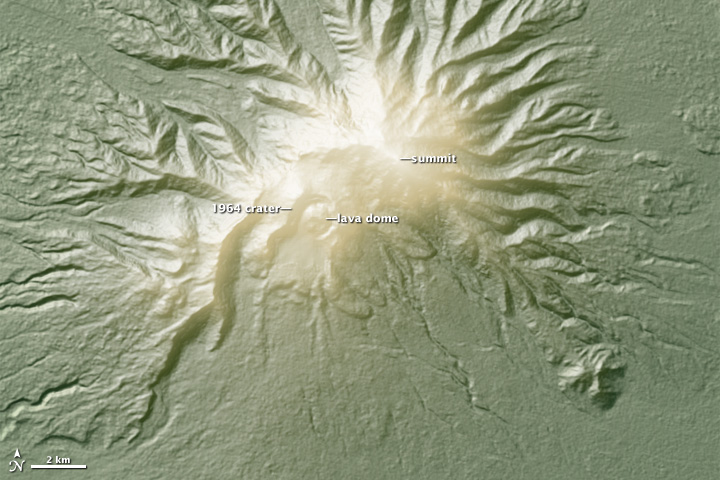 Literally and figuratively, satellites provide a unique perspective on the world. In addition to viewing Earth from above, many satellite instruments observe in wavelengths of light invisible to the human eye. This view of Russia’s Mount Shiveluch (above, top) shows the active volcano in thermal infrared wavelengths—heat energy. The hotter a surface is, the brighter it glows in thermal infrared. Researchers can also use the view from above to build topographic maps of the Earth’s terrain (above, lower). These images were collected by the Advanced Spaceborne Thermal Emission and Reflection Radiometer (ASTER) aboard NASA’s Terra satellite.

When the top image was taken, during the late night hours of December 27, 2011, the 3,283-meter (10,770-foot) summit of Shiveluch rose above a layer of low-lying clouds. The coldest, and therefore darkest, part of the image is Shiveluch’s summit. The lower slopes of the volcano are warmer, and somewhat brighter. Low-lying clouds are warmer still, and surround Shiveluch at about the 1,500-meter (5,000-foot) level. Heat from the growing lava dome on the south face of Shiveluch is light gray. The hottest and brightest areas are fresh volcanic material—probably hot rocks and rubble on the slopes of the dome, and a lava flow emanating from the southern edge. A dark gray volcanic plume, which cooled rapidly in the frigid winter night, extends to the southeast of the dome.

The topographic map of Shiveluch shows the 65,000-year-old summit, and a younger group of structures to the southwest. The current eruption, which began in 1999, is centered within a horseshoe-shaped crater that formed in 1964.

Satellites provide a new perspective on the ongoing eruption of Shiveluch Volcano. 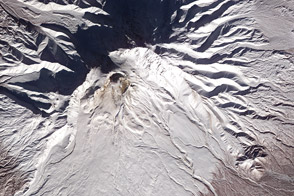 This thermal infrared image reveals a hot avalanche of volcanic debris sliding down the southern slope of Russia’s Shiveluch volcano on January 25, 2011.