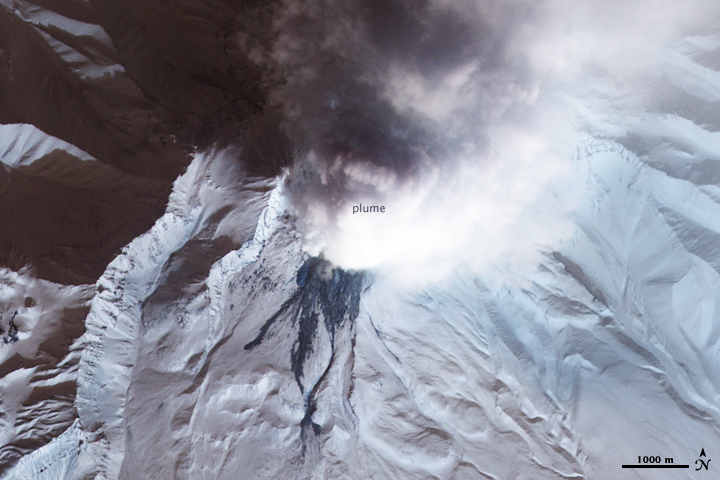 Evidence of current activity appeared at the summit of Shiveluch Volcano on Russia’s Kamchatka Peninsula in mid-February 2010. A plume shot skyward while dark rivulets flowed down the volcano’s snowy slopes. The Advanced Spaceborne Thermal Emission and Reflection Radiometer (ASTER) on NASA’s Terra satellite captured this image on February 13, 2010.

The plume, which may consist of a combination of water vapor, volcanic ash, and volcanic gases, ranges in color from white to charcoal gray. Dark flows on the snowy slopes could result from lava, mudflows, or pyroclastic flows—avalanches of hot gas and debris.

Shiveluch (also spelled Sheveluch) is a stratovolcano—a steep-sloped volcano composed of alternating layers of lava, ash, and rocks produced by previous eruptions. It ranks among Kamchatka’s most active volcanoes. In mid-February 2010, the Alaska Volcano Observatory reported that activity at Shiveluch, including a lava flow as well as ash plumes reaching an altitude of 5.2 kilometers (17,000 feet), had been elevated above background levels for days.