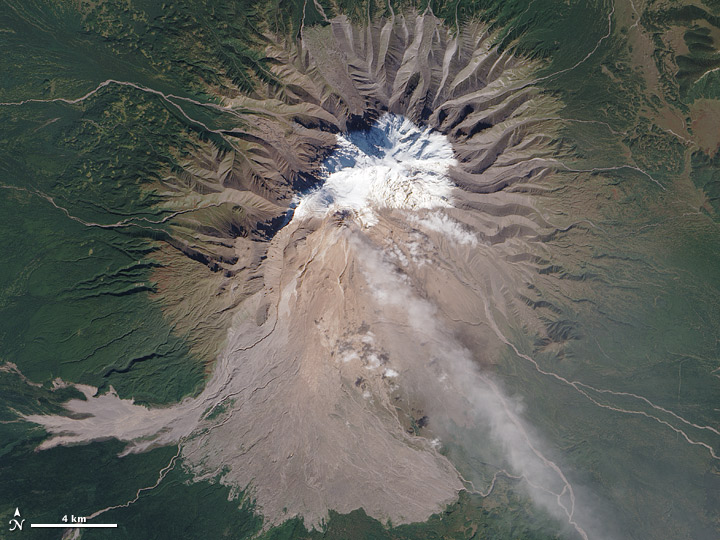 Shiveluch (also spelled Sheveluch) is one of the largest and most active volcanoes on Russia’s Kamchatka Peninsula. It has been spewing ash and steam intermittently—with occasional dome collapses, pyroclastic flows, and lava flows, as well—for the past decade. Shiveluch is a stratovolcano, a steep-sloped formation of alternating layers of hardened lava, ash, and rocks thrown out by earlier eruptions. A lava dome has been growing southwest of the 3,283-meter (10,771-foot) summit.

The Advanced Land Imager (ALI) on NASA’s Earth Observing-1 (EO-1) satellite acquired this image on September 7, 2010. Brown and tan debris—perhaps ash falls, perhaps mud from lahars—covers the southern landscape of the volcano, while the hills on the northern side remain covered in snow and ice.

The Kamchatkan Volcanic Eruption Response Team (KVERT) reported that seismic activity at Shiveluch was "above background levels" from September 3-10. Ash plumes rose to an altitude of 6.5 kilometers (21,300 feet) on September 3-4, and gas-and-ash plumes were reported on September 7, when this image was acquired.

According to the Smithsonian Institution's volcano program, at least 60 large eruptions of Shiveluch have occurred during the current Holocene Epoch of geological history. Intermittent explosive eruptions began in the 1990s, and the largest historical eruptions from Shiveluch occurred in 1854 and 1964. 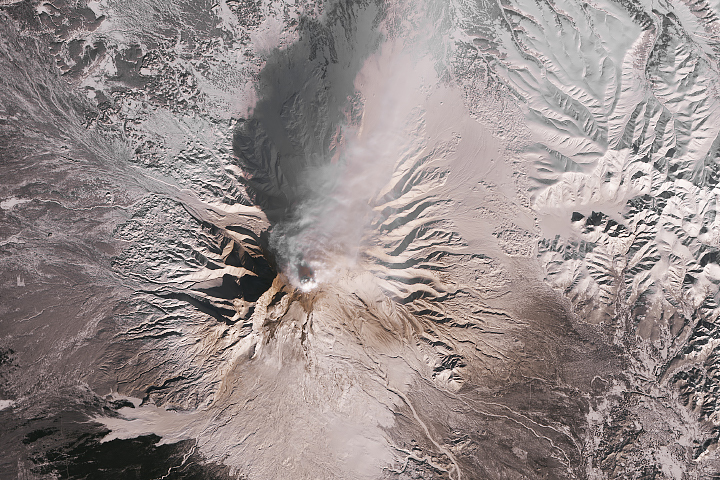 In mid-February 2019, the Kamchatkan volcano lofted ash plumes nearly 6 kilometers into the sky.