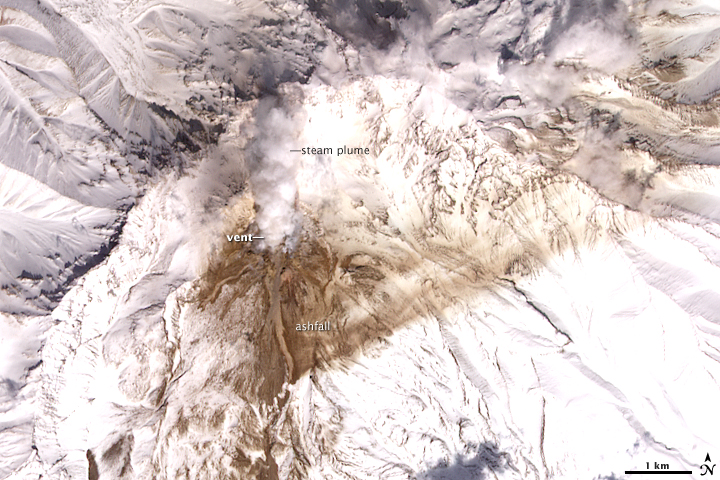 The Shiveluch Volcano on Russia’s Kamchatka Peninsula released a small plume of vapor as the Advanced Spaceborne Thermal Emission and Reflection Radiometer (ASTER) on NASA’s Terra satellite passed overhead on May 10, 2009. According to the Kamchatkan Volcanic Eruption Response Team, Shiveluch exhibited above-normal seismic activity from May 6 to May 12, 2009, and ash plumes may have reached a height of 6.7 kilometers (22,000 feet).

The steam plume blowing northward away from the volcano nearly matches the snowy white surface of the surrounding land, but ashfall from earlier eruptions has stained the volcano’s slopes dark brown. Although the snowy landscape visible in this medium-sized version of the image looks like natural color (similar to a digital photo), the image is actually made from a combination of visible and near-infrared light. The large version of the image shows a wider area, including vegetation-covered areas to the south of the volcano; in this kind of false-color image, vegetation appears red.

Shiveluch (or Sheveluch) is a stratovolcano composed of alternating layers of lava, ash, and rocks from earlier eruptions. Reaching an altitude of 3,283 meters (10,771 feet) above sea level, it is one of Kamchatka’s largest and most active volcanoes.