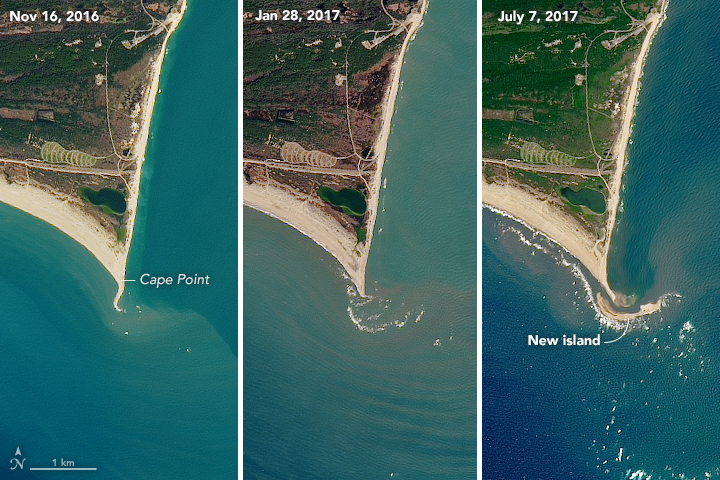 The waters off of North Carolina’s barrier islands have been called a “graveyard of the Atlantic.” Countless ships have wrecked here, due to the area’s treacherous weather and currents and its expansive shoals. These shoals are, by definition, usually submerged. But occasionally parts of them can rise above sea level.

These natural-color images, acquired by the Operational Land Imager (OLI) on the Landsat 8 satellite, show the shoal area off of Cape Point at Cape Hatteras National Seashore—the site of a newly exposed shoal nicknamed “Shelly Island.” The first image was captured in November 2016. When the second image was acquired in January 2017, waves were clearly breaking on the shallow region off the cape’s tip. The site of those breakers is where the island eventually formed, visible in the third image captured in July 2017. The new island measures about a mile long, according to news reports.

“What exactly causes a shallow region to become exposed is a deep question, and one that is difficult to speculate on without exact observations,” said Andrew Ashton, a geomorphologist at the Woods Hole Oceanographic Institution. “A likely process would be a high tide or storm-driven water elevation that piled up sediment to near the surface, and then water levels went down exposing the shoal. Waves then continue to build the feature while also moving it about.”

While the exact mechanism for the formation of Shelly Island this year is mostly unknown, the phenomenon is not uncommon. Cape Lookout, the next cape down the barrier islands (to the southwest, beyond this image) has had several islands form on its shoal over the past decade or two.

The shoreline and cape tips along North Carolina’s barrier islands are constantly in motion. Cape tips are sculpted by waves and currents that hit from all directions. Meanwhile, sediment is carried up and down the coastline and often deposited near the cape tips. Each cape has a so-called “cape-associated shoal” lurking underwater. These submerged mounds of sand can extend for tens of kilometers. They are also very shallow, rising to anywhere from 10 meters to a few meters below the surface in places.

“Tidal flows moving up and down the coast are diverted by the capes and result in a net offshore current at cape tips and deposition at the shoals,” Ashton said. “Occasionally, a portion of the shoal becomes exposed and forms an island.”