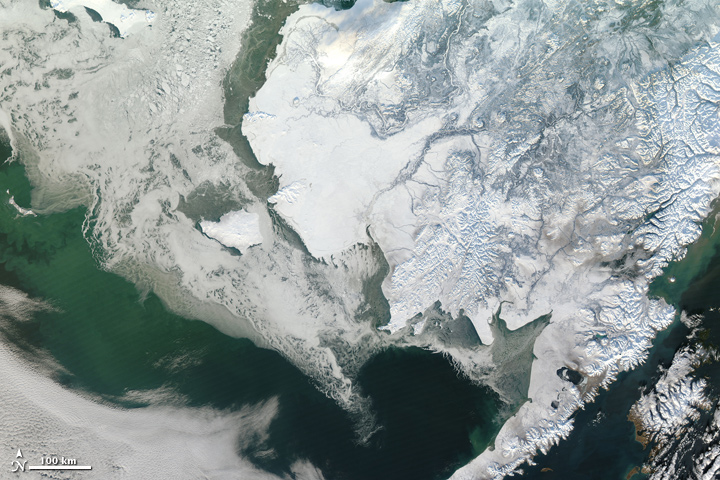 From an altitude of 705 kilometers (438 miles), the biting cold and snowy hassle of winter melts away and is replaced by minimalist beauty. The clouds that normally shroud much of the Arctic cleared on January 12, 2011, to unveil a snow-bound Alaska. The scene was captured by the Moderate Resolution Imaging Spectroradiometer (MODIS) on NASA’s Aqua satellite.

On the ground, snow is an equalizer: It covers everything uniformly in a blanket of white. But from space, snow is a revealer. Subtle variations in color and texture highlight Alaska’s rugged topography and primary ecosystems.

Inland, the vast boreal forest is dark, colored by evergreen trees that shed snow from their tall, conical forms. The treeless tundra, on the other hand, is bright white. The low shrubs and mosses on the tundra—along the coast and above the tree line in the mountains—do not break through the snow, so the landscape is an unrelieved white except for the slender rivers winding across the landscape.

Winter white extends to the ocean. Land-bound ice swells the coast, temporarily claiming the ocean for the land. The shadow of the summer coastline, where land meets sea ice, traces a faint outline—a hint of gray—between stark white sea ice and equally white coastal tundra. A brown and green channel of semi-open water separates the continent from the ice-choked Bering Sea. Moving away from land, ice creeps across the open sea in wisps and curls that resemble foamy froth.

Beyond the clutches of ice, the Bering Sea shows signs of turbulence and the dark waters swirl with vibrant green. Such color often points to phytoplankton, but this burst of color could also be sediment brought to the surface by powerful waves spawned by winter storms.

The large image, which shows a slightly broader region, is also available in multiple resolutions from the MODIS Rapid Response Team.

The clouds that normally shroud much of the Arctic cleared on January 12, 2011, to unveil a snow-bound Alaska.

Sea Ice in the Bering Strait

A mosaic of sea ice shifted across the Bering Sea west of Alaska on February 5, 2008.