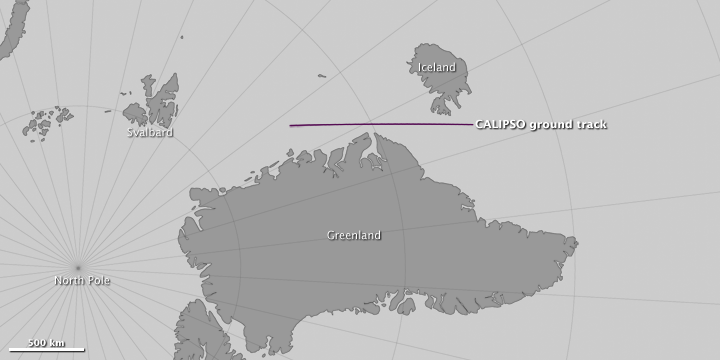 NASA’s Cloud-Aerosol Lidar and Infrared Pathfinder Satellite Observation (CALIPSO) satellite was in the right place at the right time in early 2011. While flying past the east coast of Greenland on January 4, CALIPSO caught a top-down glimpse of an unusual atmospheric phenomenon—polar stratospheric clouds (PSCs), also known as nacreous clouds.

In the extremely low temperatures of the polar stratosphere in winter, nitric acid and small traces of water vapor condense into clouds, primarily below 25 kilometers altitude. When these clouds pass near mountains, atmospheric gravity waves in the lower atmosphere (troposphere) can provide enough vertical lift to push these clouds up to higher altitudes, where they play an important role in the depletion of stratospheric ozone. .

The top image was assembled from data from CALIPSO’s Light Detection and Ranging instrument, or lidar, which sends pulses of laser light into Earth's atmosphere. The light bounces off particles in the air and reflects back to a receiver that can measure the distance to and thickness of the particle- and air masses below. The data was acquired between 4:30 and 4:44 Universal Time on January 4, 2011, as the satellite flew 1120 kilometers (695 miles) from north to south over the Greenland Sea and Denmark Strait, as depicted in the map above.

CALIPSO has observed stratospheric clouds before, but never one this high, says Mike Pitts, an atmospheric scientist at NASA's Langley Research Center. This cloud reached an altitude of more than 30 kilometers (19 miles).

The cloud was the result of mountain waves in the atmosphere, which form when stable air masses pass over mountains, providing vertical lift. Pitts said mountain wave clouds at such high altitudes are rare because they only form when the jet stream is properly aligned with the edge of the polar vortex, a large air pressure system over the poles. The circulating air in the vortex needs to align with the jet stream to allow the gravity waves to propagate to the upper atmosphere. The January 4 cloud was formed when these conditions were met over the mountains of Greenland.