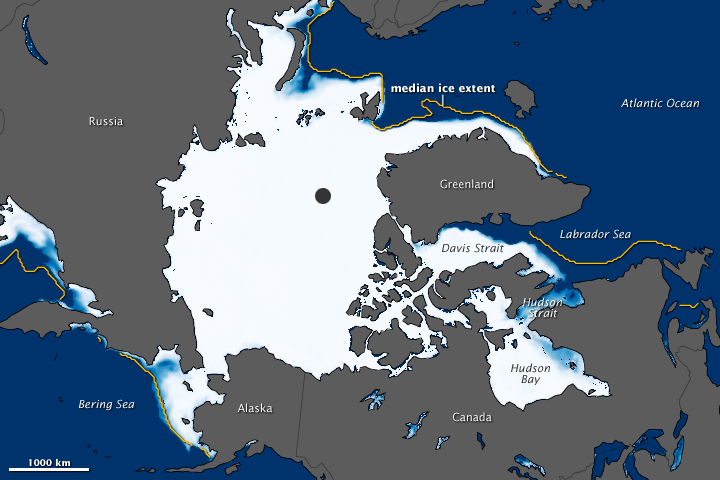 During the Northern Hemisphere winter of 2010–2011, unusually cold temperatures and heavy snowstorms plagued North America and Europe, while conditions were unusually warm farther north. Now the U.S. National Snow and Ice Data Center (NSIDC) has reported that Arctic sea ice was at its lowest extent ever recorded for January (since satellite records began).

NSIDC reported that ice extent was unusually low in Hudson Bay, Hudson Strait, and Davis Strait in the early winter. Normally frozen over by late November, these areas did not completely freeze until mid-January 2011. The Labrador Sea was also unusually ice-free.

NSIDC offered two possible explanations. One reason is the Arctic Oscillation (AO), a seesaw pattern of differences in atmospheric pressure. In “positive” mode, the AO includes high pressure over the mid-latitudes and low pressure over the Arctic, setting up wind patterns that trap cold air in the far North. In “negative” mode, air pressure isn’t quite as low over the Arctic and isn’t quite as high over the mid-latitudes. This enables cold air to creep south and relatively warm air to move north.

The AO was in negative mode in December 2010 and January 2011, according to the U.S. National Oceanic and Atmospheric Administration (NOAA). At mid-latitudes, the negative mode resulted in extremely cold temperatures and heavy snow in Europe and North America. At the same time, warm air over the Arctic impeded sea ice growth. NOAA has forecast that the AO should return to positive mode in February 2011, but for how long was unclear.

Another factor in the low Arctic sea ice extent, NSIDC explained, could be that the areas of open ocean were still releasing heat to the atmosphere. Due to its bright appearance, sea ice reflects most of the Sun’s light and heat back into space. Dark ocean water, by contrast, absorbs most of that energy and reinforces the melting process.