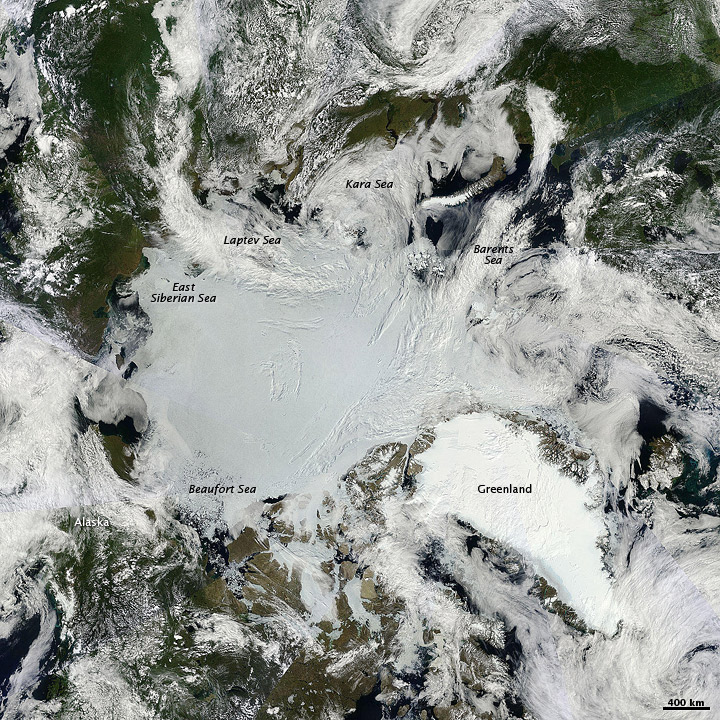 Clear skies allowed the Moderate Resolution Imaging Spectroradiometer (MODIS) on NASA’s Terra satellite a largely unobstructed view of the Arctic in early July 2011. This scene is a mosaic of observations acquired by MODIS on July 11, 2011. This natural-color mosaic shows Arctic sea ice and the brilliant white ice cap on Greenland.

High-pressure weather systems tend to bring sunny skies and high temperatures. The National Snow and Ice Data Center (NSIDC) reported that a high-pressure system occurred over the central Arctic and the Beaufort Sea in June, and high-pressure conditions persisted over the Beaufort Sea in the first half of July. Over the North Pole, and the Laptev and East Siberian Seas, temperatures were higher than normal in the first half of July, although they were lower than normal over the Kara Sea.

The same tilt in Earth’s axis that brings about seasonal changes also brings the Arctic maximum sunlight around late June and early July. When clear skies persist over the region at the same time, this can reinforce summertime sea ice melt. In parts of the Arctic, spring sea ice melt began earlier than usual, NSIDC stated.

On July 18, 2011, NSIDC reported that Arctic sea ice had declined at a rapid pace during the first half of July, and is currently tracking below the trend line for 2007. In September 2007, Arctic sea ice set a record low. Whether 2011 will set a new record, however, is yet to be seen.

The large version of this image has a resolution of 1 kilometer.