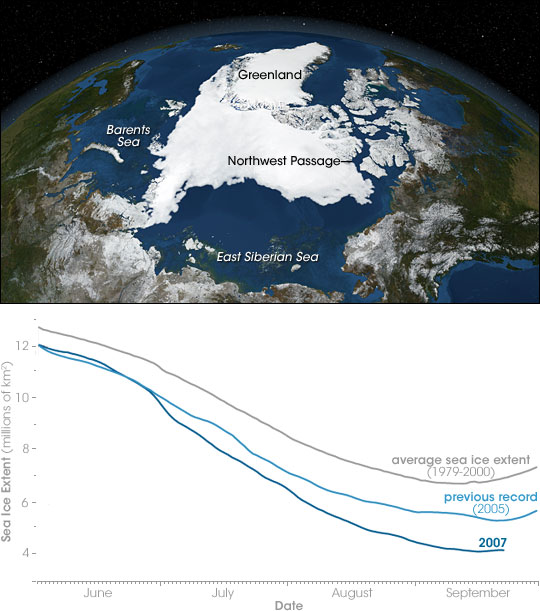 This image of the Arctic was produced from sea ice observations collected by the Advanced Microwave Scanning Radiometer (AMSR-E) Instrument on NASA’s Aqua satellite on September 16, overlaid on the NASA Blue Marble. The image captures ice conditions at the end of the melt season. Sea ice (white, image center) stretches across the Arctic Ocean from Greenland to Russia, but large areas of open water were apparent as well. In addition to record melt, the summer of 2007 brought an ice-free opening though the Northwest Passage that lasted several weeks. The Northeast Passage did not open during the summer of 2007, however, as a substantial tongue of ice remained in place north of the Russian coast.

The graph of sea ice melt shows the five-day mean sea ice extent for June through September, based on NSIDC’s Sea Ice Index. It compares values from 2007 with those from 2005 and the average (1979-2000). Although the 2007 melt season started out with slightly greater sea ice extent than 2005, melt accelerated in the second half of June, especially in the East Siberian Sea, where warm temperatures and clear skies hastened the ice’s retreat. From early July onward, ice extent remained below the levels of 2005. By early August—more than a month before the end of the melt season—the extent had already dropped below the minimum reached at the end of the 2005 melt season. The Arctic started to regain ice in mid-September, as summer came to a close.

Sea ice acts as the Earth’s built-in air conditioner. Because of its light color, Arctic sea ice reflects most of the sunlight reaching it back into space. In contrast, dark ocean water absorbs most of the sunlight. As sea ice continues melting, the increased exposure of ocean water changes the Earth’s albedo—the fraction of sunlight reflected away from the planet. This change in albedo can cause further warming, leading to continued sea ice melt and reinforcing the melting cycle. As summer melt continues to increase, wintertime recovery becomes more difficult to achieve. According to Mark Serreze, senior research scientist at NSIDC, Arctic sea ice could melt completely as early as 2030.