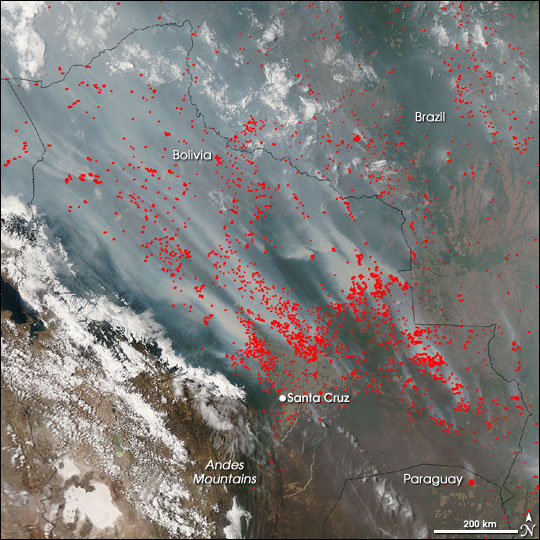 Hundreds, possibly thousands of fires (locations marked in red) were burning in South America when the Moderate Resolution Imaging Spectroradiometer (MODIS) on NASA’s Aqua satellite passed overhead on September 25, 2007, and captured this image. The most intense fire activity was in Bolivia, where fires are concentrated in the Santa Cruz Department, in the southeastern part of the country. Thick smoke hangs over much of the scene. The towering Andes Mountains (lower left) partially block the flow smoke to the west.

Although naturally occurring fires can occur in the savannas and dry woodlands of southern Bolivia and northern Paraguay, this type of intense, widespread burning is likely the result of human activities. Agricultural fires (for example, fires for brush or crop-residue clearing) can get out of control and spread to surrounding forests and other natural areas.

Fires have been burning intensely in South America throughout the month, but the location of greatest activity has varied. On September 9, for example, fire activity was high in southernmost Brazil, Paraguay, and northern Argentina. Additional images of the fires and thick smoke over South America in September 2007 are available in the Earth Observatory’s Natural Hazards section.

Scores of fires filled the South American skies with smoke in September 2007.